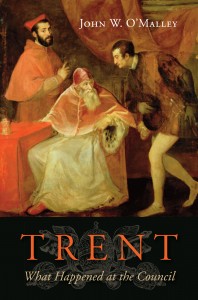 Catholic readers will be grateful for John O’Malley’s “Trent,” the long-awaited story of one of the most influential events in the religious history of Western Europe, the 16th-century council of the Catholic Church that set the tone for 400 years. The author has a mastery of the historical sources in all of the languages, yet the story is told with the verve and intrigue of a mystery novel.

The long and conflicted collection of meetings and texts that make up this 18-year event (1545-1563) produced an amazing amount of agreement and some texts which have weathered the test of time, despite pressures from various elements of church life: the bishops at the council, the representatives of the emperor and kings, and the pope and cardinals, most of whom remained in Rome.

The very idea of the council was contested by both reformers and their adversaries from the days when the idea was proposed in the second decade of the 16th century. A century of tension between the papacy and the advocates of councils in the church made the very idea a threat in some quarters, and the only route to the solution of the divisions in Europe for others. It took almost three decades for enough consensus to emerge for the council finally to be called in a small diocese south of the Alps, not in the papal states.

Originally, the purpose of the council was to secure peace in Europe, beat the Turks, and resolve the religious question. When it finally did meet, the goals had settled into clarifying Catholic doctrine, reforming the church and reuniting Christians. To the amazement of many, it was successful at the first two goals, but not the third. At this most expansive moment in Christian history, no voices from the new territories in Latin America or Asia were present, and issues significant for the global church did not come onto the agenda.

By the time the council met, dialogue between the reformers and the bishops loyal to Rome had become impossible. There were voices throughout the council calling for direct dialogue with the reformers. However, when some were present in the second session (1551-1552), polarization was so pronounced that true dialogue was not possible. Nevertheless, the council wisely couched its condemnations carefully so as to focus on excluded doctrines and not condemnation of persons or schools of thought. This has made ecumenical resolution of some of the issues easier in recent decades.

Many things are attributed to Trent that were really developments in the following decades. The doctrinal and reform decrees were implemented after, through new liturgical reforms, reordering of the church, the catechism and the practical examples of reforming bishops. The fact that contentious debates were able to be concluded (or avoided!) successfully is indeed remarkable, given the polarization among the bishops and princes loyal to conciliar and papal unity.

Some attribute 20th-century papal centralization and the uniformity of Western Latin liturgy to the acts of the council. However, both Pope Paul III, who opened the council, and Pope Pius IV, under whom it was brought to a conclusion, were assiduous in seeing that the theological relationship between bishops, councils and the papacy were not allowed to come to the floor, since there was clearly no consensus on the ecclesiological constitution of the church. This work would be left to Vatican Councils I, II and continued discussion in the modern ecumenical movement.

This is an extraordinary story of faith and fidelity, of conflict and compromise, and of the consolidation and innovation in worship, biblical preaching, institutional reordering and interdependence in the midst of conflict. It is surely a testimony to the Spirit’s activity in the church, laying the groundwork for the developments in liturgy, ecclesiology and understanding the faith which have emerged from Vatican II.

As we look back at what the church has accomplished in history, we are grateful for scholars like O’Malley who apply the critical tools, so fruitful in our view of the Scriptures, to the authoritative teachings from this contentious and seminal assembly.

Few Catholics can imagine a church without seminaries and seminary-trained clergy, where dioceses and wealthy parishes went for decades without resident leadership, with styles of worship without an international touchstone of global interdependence in Western Catholic liturgy, or where biblical preaching was an anomaly in parish life. While much more is attributed to the Council of Trent than was factually enacted there, the irreversible and positive impact of what was done remains a hallmark of the continual vitality, change and development of the Christian life and community.