Jurassic Park in 3-D will leave goosebumps on your goosebumps 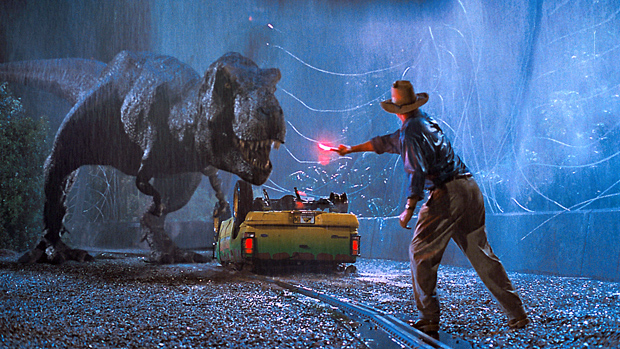 Moviegoers are in for some extreme excitement if they venture within the terrifying boundaries of “Jurassic Park” (Universal), now rereleased with 3-D effects.

The first hour is almost humdrum, simply an atmospheric buildup to what everyone knows will happen: the dinos running amuck and puny humans running for their lives.

This is a movie where action speaks much louder than words and, as such, dialogue and characterizations are weak. It’s the special effects that are mighty.

And spectacular they are. The six species of dinosaurs look incredibly realistic and the ravenous shrieks they emit will raise goose bumps on your goose bumps.

Spielberg handles the death scenes gingerly (undoubtedly to avoid an R rating and win a more profitable PG-13) and victims are usually done in behind bushes, fogged-up windows or off-screen.

The menace to the two kids (Joseph Mazzello and Ariana Richards), however, is really scary in scene after scene and would definitely give children nightmares. In fact, the movie becomes such a terrifying horror film, it may be too intense even for a few teens and adults although most should be able to handle the high-velocity thrills.

With such a premium placed on the rampaging monsters, it is actually the group shots of peaceful dinos that are enchanting. Cinematography is top-draw, with the Hawaiian island of Kauai lushly standing in for the Costa Rican island setting of the bizarre Jurassic Park.

Humor is well-used as much-needed comic relief with some wry remarks coming from maudlin mathematician Jeff Goldblum. Theme park developer Richard Attenborough and romantically involved scientists Laura Dern and Sam Neill round out the cast, but they are mostly props in the plot.

The underlying moral question — whether science has the right to tinker with the natural laws without regard to consequences — is paid lip service in phony-sounding dialogue, although the answer seems clear in serene closing shots of birds soaring over the ocean.

But for most of the movie it is the dino that soars and roars in this larger-than-life thriller.

Due to much intense menace to children and several stylized scenes of violent death, the Catholic News Service classification is A-II — adults and adolescents. The Motion Picture Association of America Rating is PG-13 — parents are strongly cautioned. Some material may be inappropriate for children under 13.

Pare is retired director of the U.S. Conference of Catholic Bishops’ Office for Film and Broadcasting.

A bizarre theme park featuring genetically re-created dinosaurs becomes a potential deathtrap when the carnivorous monsters break loose, endangering some visiting scientists (Sam Neill, Laura Dern and Jeff Goldblum) and two very frightened young children (Joseph Mazzello and Ariana Richards). Director Steven Spielberg’s monster fantasy downplays plot and characterization in favor of spectacle and horrific special effects, now in 3-D, in which the realistic-looking creatures hunt down their human prey. Much intense menace to children and several stylized scenes of violent death. The Catholic News Service classification is A-II — adults and adolescents. The Motion Picture Association of America rating is PG-13 — parents are strongly cautioned. Some material may be inappropriate for children under 13.