Oblivion: The action-packed movie of the future 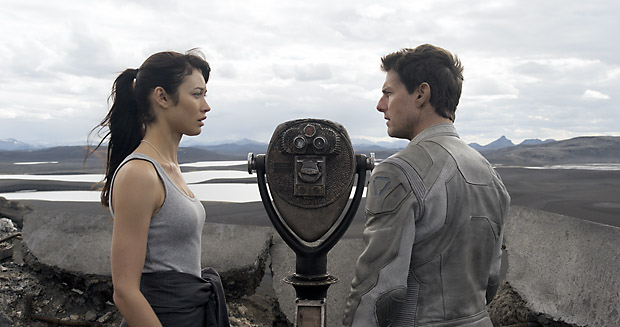 While mature moviegoers may shrug off the amateur metaphysics of Karl Gajdusek’s script easily enough, taken together with its ethical complexities — difficult to probe for fear of spoilers — they make this convoluted dystopian drama wholly unsuitable for young or impressionable viewers.

Protagonist Jack Harper (Tom Cruise) does his best to fill us in: It’s 2077; 60 years ago invading aliens known as Scavengers shattered the moon and almost conquered Earth. Though they failed, the consequences of lunar fragmentation and worldwide combat made global warming seem like meteorological chump change. Fortunately, humanity managed to find itself a new home on Saturn’s moon Titan.

So what’s Jack, a trained technician, doing back on the home planet? Along with a navigator named Victoria (Andrea Riseborough), Jack has been dispatched to tend machinery that allows the folks on Titan to continue harvesting Earth’s natural resources, especially water. A romantic as well as professional pair, Jack and Victoria lead a cozy, placid life under the watchful guidance of mission control.

All of that begins to change with the unexpected arrival of Julia (Olga Kurylenko), an astronaut from the days before the intergalactic war. Her crash landing draws an unexpected and troubling response from Jack’s superiors.

Jack’s peace of mind is further disturbed by his encounter with a group of guerilla freedom fighters. Beech (Morgan Freeman), their chief, challenges the inquisitive repairman to test the version of history mission control has long been feeding him.

The far end of Jack’s journey of discovery offers audiences some self-sacrificing heroics and a resolution that sees pride-based blasphemy receive its comeuppance. Yet potentially troubling questions about the relationship of physical and spiritual identity also are thrown into the mix. And the revelation of Julia’s true role makes Jack’s initial domestic situation retrospectively problematic.

Well-grounded audience members may succeed in winnowing through all these elements. But they may also wind up asking themselves whether the material at hand justifies so much prudential effort.

The film contains an objectively immoral living arrangement, a scene of sensuality with shadowy rear and partial nudity, a couple of uses of profanity, at least one rough term and a smattering of crude and crass language. The Catholic News Service classification is A-III — adults. The Motion Picture Association of America rating is PG-13 — parents strongly cautioned. Some material may be inappropriate for children under 13.

NEXT: All Christians can find their story in overview of first 1,000 years