Dialogues between rabbi, new pope tell much about Church’s future 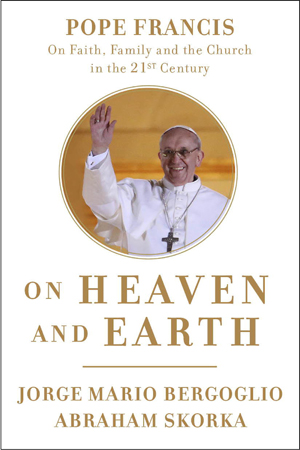 “On Heaven and Earth: Pope Francis on Faith, Family and the Church in the Twenty-First Century”
by Jorge Mario Bergoglio and Abraham Skorka.
Image Books (New York, 2013). 256 pp., $22.

The publication of a book of informal yet profoundly thoughtful dialogues between a cardinal and a rabbi was a rare event when this book was first published in Buenos Aires in 1995. When the cardinal became Pope Francis, “On Heaven and Earth” became a historic document, the first such open-ended dialogue between a pope and a rabbi in the history of Judaism and Catholicism.

Both then-Cardinal Jorge Mario Bergoglio and Rabbi Abraham Skorka are scholars, not only in theology and rabbinic studies, respectively, but in science. It is natural that their discussion revolves around the classic issues of faith and reason, religious truth and scientific inquiry.

The authors take a pastoral view, concerned with the day-to-day problems and dilemmas, hopes and fears shared by all of us as ordinary human beings.

The result is a book rich in insight into both Judaism and Catholicism, and about how our two ancient traditions have and continue to deal with the essential issues of living a moral life of faith in a complex world. It is a book that will be of interest to the normal, active parishioners and congregants to whom the authors have dedicated their lives.

The world with which these two religious leaders grapple is that of Argentina, a large, originally Catholic country that is now, much like the United States, a pluralist democracy. Like the United States, Argentina has over the course of its history had a wide range of social and religious problems that have led to political crises and, at times, internal violence. An intriguing difference, however, is that the founding culture and dynamics of Argentinian life were, and to a great extent still are, formed by Catholicism, whereas in the U.S. Jews and Catholics were both minorities in a largely white, Protestant society.

The 29 chapters of this book cover a wide range of topics. They deal with traditional theological issues such as God and the devil, being atheist and being religious, the duties of religious leaders and the responsibilities of discipleship. There are chapters on prayer, guilt and death. The views of Jews and Catholics on medical and moral issues, same-sex marriage, globalization, wealth and poverty are presented and analyzed from the perspective of two living, evolving religious traditions.

The histories of Catholic Argentina and the Jewish state of Israel, and the moral/social challenges each as faced over the course of time are discussed frankly. Deep questions central to the dialogue between the church and the Jewish people, such as the Holocaust, the present state of Catholic teaching about Jews and Judaism, the future of relations between Jews and Christians, and of religion in general are probed.

This is a book through which both Jews and Catholics will come to newer, deeper understandings of their own faiths. It is a book that tells us much about Pope Francis, what his papacy may be like, and how he will help to shape the future course of the Catholic Church internationally and on the local, parish level.

Fisher is a professor of Catholic-Jewish studies at St. Leo University in Florida.

NEXT: ‘After Earth’: Will Smith and son can go home again, but should they?