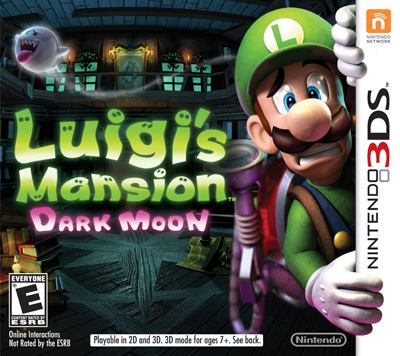 NEW YORK (CNS) — Back in 2001, a small title was released on the ill-fated Nintendo GameCube console called “Luigi’s Mansion.” It featured the lesser-known brother of Nintendo’s celebrated mascot Mario.

On a console that was a rare miss for the juggernaut corporation, “Luigi’s Mansion” was a rare, original gem. The game quickly developed a cult following — and inspired calls for a sequel.

A dozen years later, the company has finally responded with “Luigi’s Mansion: Dark Moon” (Nintendo) for the Nintendo 3DS. For the most part, fans of the original will not be disappointed.

As in that first outing, ghosts have invaded a series of mansions, and green-hatted plumber Luigi is tasked with getting rid of them by the baby-faced Professor E. Gadd.

This time, though, Luigi must also collect pieces of the Dark Moon — a mysterious magical object that floats in the sky over Evershade Valley, the game’s fictional setting. When intact, the Dark Moon had a soothing effect on the sprites, allowing the professor to study them. But the orb has shattered, and its absence has turned the once-chummy spooks into nasty little devils.

So our hero must capture each piece of the moon from each enormous dwelling, meanwhile clearing up ghosts with his trusty vacuum cleaner (known as the Poltergust 5000), solving puzzles and besting bosses.

In typical Nintendo style, the game is exceedingly well made, and achieves an excellent balance between tranquil brainteasers and frantically paced ghost-hunting. The result is that neither element becomes tiresome. The mechanism by which Luigi sweeps up the phantoms while being dragged around the screen is also highly entertaining.

While morally suitable for almost everyone, a bit of bathroom humor notwithstanding, “Dark Moon” does suffer from at least one serious technical flaw: The save system only allows players to save at the end of each level.

Given that each stage of play can last for as long as 20 minutes, dying at the final challenge and being forced to restart the whole section will prove achingly frustrating even for older gamers. For less patient youngsters, it may turn them off completely, spoiling what is otherwise an exceptional experience.

The game contains occasional instances of mild scatological humor and some potentially frightening material. The Catholic News Service classification is A-I — general patronage. The Entertainment Software Rating Board rating is E — Everyone.

NEXT: Dialogues between rabbi, new pope tell much about Church’s future