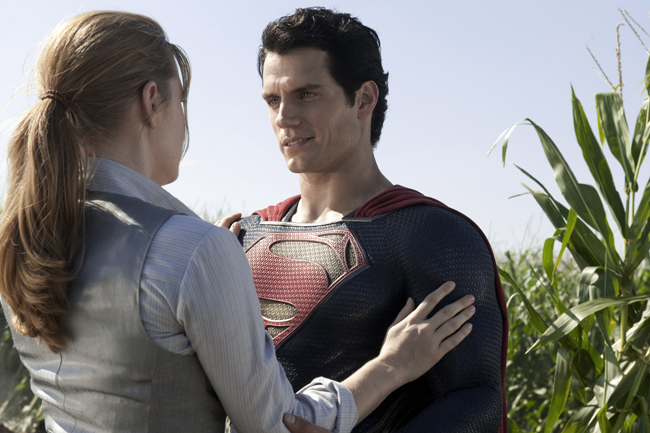 NEW YORK (CNS) — “Man of Steel” (Warner Bros.), director Zack Snyder’s take on the familiar narrative of Superman, has the makings of an engaging drama and features thematic elements that viewers of faith in particular can appreciate.

But this 3-D adventure’s positive potential winds up being squandered in favor of endless scenes of high-powered brawling and the pyrotechnics of innumerable explosions.

We all know the basic outlines of the tale: Born on distant Krypton, as an infant the iconic comic book hero (Henry Cavill) is sent to Earth by his parents (Russell Crowe and Ayelet Zurer) so that he can escape his doomed home planet’s imminent destruction. Landing in the American heartland, he’s adopted by the Kents (Kevin Costner and Diane Lane) who instill positive values and try to protect his secret.

In the version at hand, screenwriter David S. Goyer’s script weaves back and forth in time to fill us in on these facts even as investigative reporter — and future love interest — Lois Lane (Amy Adams) is hot on the trail of the adult Superman’s true identity. Though she’s ultimately ambivalent about the consequences of unmasking the mild-mannered drifter — his career as Lois’ colleague still lies in the future — intergalactic events overtake her.

General Zod (Michael Shannon), an old enemy of Superman’s father Jor-El, arrives from space and threatens humanity with annihilation unless Superman surrenders to him. Flashbacks have already shown us Zod’s fascist tendencies and his failed coup against the lawful government of Krypton. Ironically, the sentence of exile Zod and his confederates received as punishment following their defeat saved them from perishing in Krypton’s apocalypse.

Zod’s ultimatum brings the obvious parallels between Superman and Jesus to the fore, and neither Goyer nor Snyder shows any reluctance to highlight them. As he ponders whether to sacrifice himself to save the human race, Superman visits a church and seeks the advice of a clergyman. During their conversation, he stands against the backdrop of a stained-glass window showing Jesus at prayer in the garden of Gethsemane.

Dialogue reveals in passing that Superman has reached the symbolically significant age of 33. And, as he launches himself into flight at one point, the superhero extends his arms in the manner of Christ on the cross.

Along with these theological flourishes, “Man of Steel” also includes plot details that touch on real-life moral issues. Thus Zod is committed to a form of eugenics that arose on Krypton in the lead-up to its disintegration. Under this scheme, children were bred to fulfill a predetermined social role and their lives before birth were spent not in their mothers’ wombs, but in an artificial atmosphere within which they were nurtured en masse.

Superman’s parents were completely opposed to this system, and saw to it that Superman became the first child on Krypton in many years born in the natural way. Their clashing views on this subject constituted one of the sources of conflict between Zod and Jor-El.

Flash forward, and Zod’s motivation in tracking Superman down is shown to be connected to his efforts to perpetuate the race of their vanished planet by a return to his favored method of social and genetic engineering.

All of this might have been explored at some length had there not been a huge budget for special effects to expend. Or perhaps there was the lurking fear that adolescent boys would be bored by such subtleties.

Whatever the cause, all human interest the picture initially contains yields, in the end, to pure chaotic spectacle. Superman and his adversaries hurl each other about; skyscrapers are leveled and oil trucks ignited. Then it’s on to more of the same in a different locale.

Oh, well, as they say on Krypton, it was nice while it lasted.

The film contains much intense but bloodless violence, a fleeting sexual advance and occasional crude and crass language. The Catholic News Service classification is A-III — adults. The Motion Picture Association of America rating is PG-13 — parents strongly cautioned. Some material may be inappropriate for children under 13.

PREVIOUS: New comedy just about as funny as the end of the world

NEXT: Brad Pitt would rather not be in Philadelphia for ‘World War Z’s zombie apocalypse