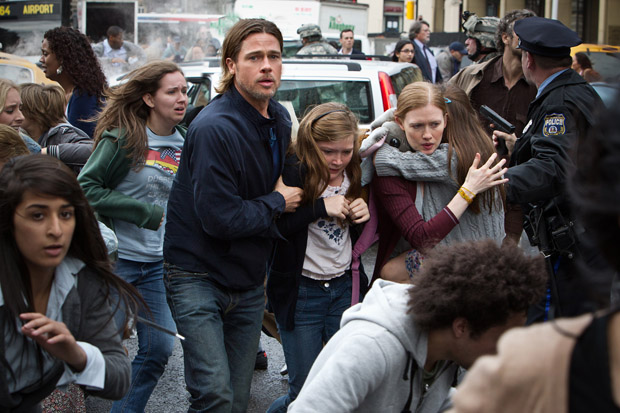 NEW YORK (CNS) — When the zombies come a-runnin’, as they do throughout “World War Z” (Paramount), the only defense will be guns, knives, duct tape and maybe a vaccine.

That’s all there is to this dreary apocalypse tale, which stars Brad Pitt as United Nations troubleshooter Gerry Lane. As in, there’s trouble, and he shoots.

Lane, who’s retired from that job, is called back into action by U.N. Undersecretary Thierry Umutoni (Fana Mokoena) because the president of the United States is dead, the vice president is missing, and no one in particular seems to be in charge, so the planet needs an exterminator — right quick.

This loose adaptation of Max Brooks’ novel by director Marc Foster and screenwriters Matthew Michael Carnahan, Drew Goddard and Damon Lindelof respectfully observes all the cliches of the zombie-pandemic genres without much gore, possibly because there are thousands upon thousands of zombies to shoot at, blow up, or hit with flamethrowers.

Lane’s calm morning, as he takes daughters Connie (Sterling Jerins) and Rachel (Abigail Hargrove) to school with wife Karin (Mireille Enos) in Philadelphia, is interrupted with zombies running amok, holding up traffic and wrecking his minivan. He manages to steal another vehicle, and they get as far as Newark to loot a drugstore for Rachel’s asthma medicine. Umutoni is on the phone, demanding that he get to where a helicopter can pick them all up, and soon they’re at sea on an aircraft carrier.

Lane is ordered to find the source of whatever it is that’s creating zombies, which takes him to a military base in South Korea, then to Jerusalem, where a huge wall surrounds the city to keep the undead at bay.

There may be a sublimated political message here about the Palestinians, undocumented immigrants or maybe even the walls of Jericho, but the scenes there move too quickly for obvious subtext. They’re just an excuse to show how zombies can pile up and scale that wall.

Finally, Lane heads to a World Health Organization research lab in Wales. Along the way, he picks up Israeli security guard Segen (Daniella Kertesz), who, like himself, is durable enough to survive the crash of the jumbo passenger jet taking them there.

What pluck! What moxie! And what a time-waster!