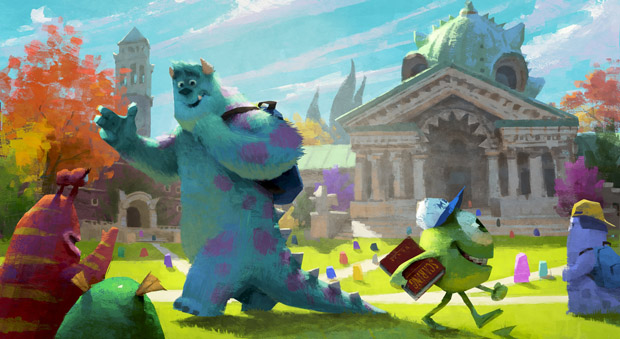 NEW YORK (CNS) — Your friendly neighborhood monsters are back. This time, they’re heading to college and screaming up a storm in “Monsters University” (Disney), a 3-D animated prequel to the 2001 hit “Monsters, Inc.”

This hilarious sendup of academia provides the backstory to key characters. It also reinforces familiar but important messages for young people (and their parents): Make friends, work together, study hard, and apply your unique talents for the greater good.

A prequel is never easy, as the audience already knows what has become of the main characters, best friends Mike Wazowski (voice of Billy Crystal), a lime-green eyeball, and James P. “Sully” Sullivan (voice of John Goodman), a purple bearlike creature.

Director Dan Scanlon meets the challenge with dozens of new characters (cue the merchandising) and a slapstick-filled script (by Scanlon, Robert Baird and Daniel Gerson) that offers a sanitized cross between “National Lampoon’s Animal House” and “Revenge of the Nerds.”

For the uninitiated, the city of Monstropolis is powered by the energy gleaned from screaming human children, frightened by the monsters that appear in their bedrooms at night. Scream-inducing talent must be developed, hence the elite School of Scaring at Monsters U.

Founded in 1313, the university is committed to “the relentless pursuit of monster potential,” according to its mission statement. “Scaring is the true measure of the monster,” intones Dean Hardscrabble (voice of Helen Mirren), a formidable flying centipede.

Mike, bullied as a child because of his small stature, is determined to succeed. He cracks the books and rises to the top of Scaring 101 class. He’s the opposite of Sully, a fun-loving popular guy who gained admission as a legacy; his father was a famous “scarer.”

The two lock horns in class and are thrown out of the program. Eager for a second chance, Mike discovers the Scare Games, a rumble organized by the college’s fraternities to see who’s the meanest and most menacing.

To enter, Mike must join a fraternity, but none will have him, not the athletes of Jaws Theta Chi (JOX) or the meanies of Gamma Roar Roar (GRR). Only Ozzma Kappa (OK) will take him in.

As fraternities go, OK is the Island of Misfit Toys, whose relentlessly cheerful members embrace their motto (“I’m OK!”) and would rather sit around drinking cocoa than be scary. But victory in the games would mean readmission to the School of Scaring. So with Sully on board, Mike inspires his frat mates to reach for the top.

Preceding “Monsters University” is a charming short film from Pixar, “The Blue Umbrella,” which explores love among parasols on a rainy city street. Both films are clean and wholesome fun for the entire family.

PREVIOUS: Brad Pitt would rather not be in Philadelphia for ‘World War Z’s zombie apocalypse

NEXT: Mother Dolores Hart reflects on life of screen gems with Elvis, to reforming a monastery