Old guys go for the gags at Google, in ‘The Internship’ 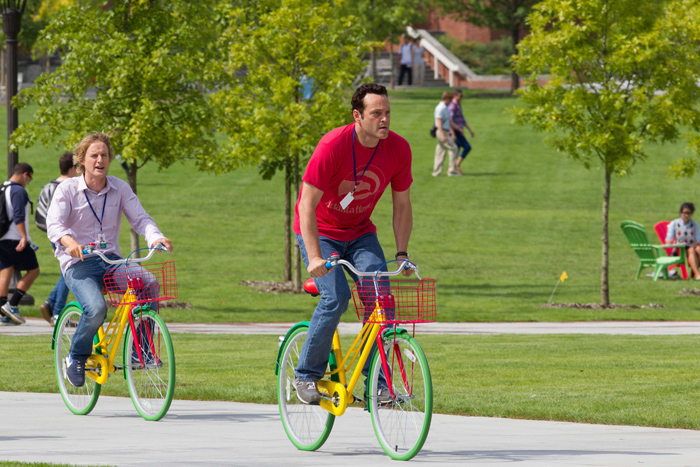 NEW YORK (CNS) — Director Shawn Levy’s comedy “The Internship” (Fox) has a topical premise along with two likable stars. Humor and inventiveness, on the other hand, are in short supply.

Adding insult to comedic injury, the belabored effort has enough bad language and offensive material to cancel out its pertinent message concerning the virtues of adaptability and perseverance, especially during a difficult economic period.

Vince Vaughn and Owen Wilson play Billy McMahon and Nick Campbell, middle-aged watch salesmen who suddenly find themselves unemployed and with little to show for their years of enthusiastic peddling. Evidently, now that most everybody carries an electronic device that displays the time, the demand for watches has cratered.

Moreover, Billy and Nick may be skilled shills, yet their computer illiteracy makes them virtual dinosaurs in the digital age.

At a loss for how to carry on professionally and personally, they apply for the highly competitive internship program at corporate giant Google. It’s the domain of tech-savvy college-age kids, but Billy and Nick are chosen for diversity’s sake — precisely because they don’t fit the typical profile.

Arriving at Google’s Silicon Valley campus, the duo bands together with three socially awkward whizzes in a competition to see which team of interns will be offered paying jobs at summer’s end.

Essentially a long advertisement for Google, “The Internship” is rarely laugh-out-loud funny and is chock-full of inevitabilities. These include a plethora of movie references, a rollicking sports sequence, romance for Nick — who woos Dana Sims (Rose Byrne), a senior Google employee — and a night on the town that enables the old dogs to show the young pups how to party.

Working from a script by Vaughn and Jared Stern, Levy strains to wring humor from the generational and cultural divides that separate Billy and Nick from the other wannabe “Googlers.”

The movie is partially redeemed by its upbeat message about self-actualization in the face of rampant obsolescence caused by seismic shifts in the economic landscape. Were it not for the steady stream of vulgarity and off-color references, it could serve as a guide to successful career reinvention.

That said, Vaughn and Wilson are among the most appealing of the many actors routinely portraying children in grown men’s bodies. A cameo by Will Ferrell, the poster boy for sophomoric screen antics, is a reminder of how much cruder “The Internship” might have been.

Technology may be advancing by leaps and bounds — and, ideally, the workforce along with it — but film comedies seem stuck in the Stone Age.

The film contains an implied premarital encounter, several uses of profanity, at least one rough term, frequent crude and crass language, considerable innuendo and passing approval of a same-sex relationship. The Catholic News Service classification is L — limited adult audience, films whose problematic content many adults would find troubling. The Motion Picture Association of America rating is PG-13 — parents strongly cautioned. Some material may be inappropriate for children under 13.

NEXT: New comedy just about as funny as the end of the world