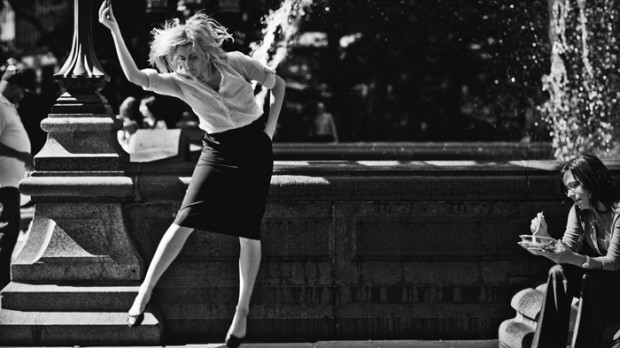 NEW YORK (CNS) — In the 1990s, comedian Jerry Seinfeld made a hit — and a fortune — with an eponymous TV series which was, he claimed, “about nothing.” Along comes its cinematic sister, “Frances Ha” (IFC), the tale of a feckless 27-year-old who’s waiting for her life to happen.

Set, like “Seinfeld,” in New York City, “Frances Ha” also pays homage to the films of Woody Allen in its use of physical comedy and moody soundtrack. Director Noah Baumbach (“Greenberg”) — who co-wrote the screenplay with the film’s leading lady, Greta Gerwig — chose to shoot the movie in black-and-white, casting Gotham in a warm and fuzzy glow.

Frances (Gerwig) is a free-spirited dancer, living with her best friend, Sophie (Mickey Sumner), in Sophie’s Manhattan apartment. Frances is a drifter, dreamer and overall loser, branding herself as “undateable,” yet all the while retaining a sunny outlook.

When the ambitious Sophie decides to move out and, eventually, live with her boyfriend Patch (Patrick Heusinger), Frances is cast adrift, suddenly homeless with no real job and few prospects.

Not that this especially bothers her, as she flits from party to party, telling anyone who will listen, “I’m trying to be proactive about my life” and “I don’t really do what I do.”

A rescue of sorts comes in the form of a small tax refund from the IRS, which Frances blows on dinner with Lev (Adam Driver). This leads not to romance but a new place to stay and two fun-loving drinking buddies, Lev and his roommate, Benji (Michael Zegen).

And so we follow our goofy heroine as she faces each new day, impulsive and selfish yet adorably endearing, just waiting for something to happen. She visits her parents in California, flies to Paris on a whim, even moves back in at her old college dorm.

Where is this heading, you may ask? There is indeed an “a-ha” moment at the end of the film (which explains the “Ha” of the title), but the self-absorbed Frances is hardly a role model for today’s twentysomethings. Especially when she dispenses unintelligible advice such as, “Sometimes it’s good to do what you’re supposed to do when you’re supposed to do it.”

PREVIOUS: There’s more than meets the eye in ‘Now You See Me’

NEXT: Old guys go for the gags at Google, in ‘The Internship’