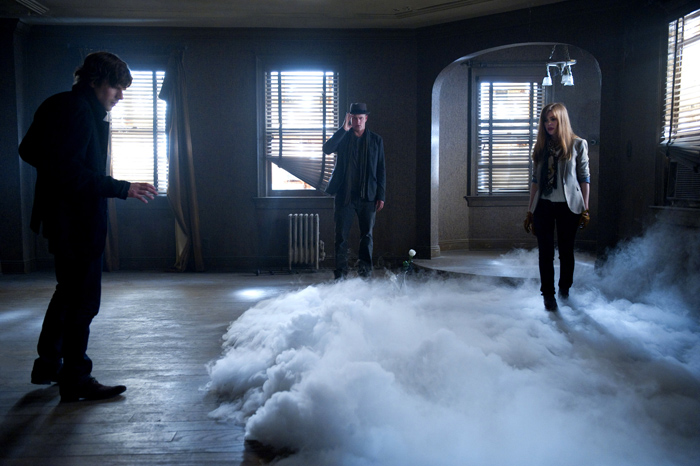 NEW YORK (CNS) — Professional magicians are caught up in a high-stakes game of cat and mouse — or white rabbit and doves, perhaps — in “Now You See Me” (Summit), an entertaining caper movie.

Director Louis Leterrier (“Clash of the Titans”) overcomes a huge handicap — making magic appear convincing on the big screen — by going behind the scenes and deconstructing the tricks, revealing how magicians manage the “now you don’t” part.

Four magicians, each with a particular skill, are struggling to make a living: Daniel (Jesse Eisenberg) is handy with a deck of cards. Merritt (Woody Harrelson) is a master of “mentalism,” hypnotizing his subjects to reveal their darkest secrets. Jack (Dave Franco) can bend spoons. And Henley (Isla Fisher), a Houdini-like escape artist, specializes in being chained underwater, only to break free in the nick of time.

Each magician receives a tarot card with instructions to meet in a rundown Manhattan apartment. Flash forward one year, and the four have become a world-famous team, “The Four Horsemen.” They’re managed by a mysterious capitalist (Michael Caine).

Does this quartet foretell an apocalypse? Not quite. But their glitzy Las Vegas act is more than it appears. No mere sawing a lady in half for this bunch! For their big finale, they manage to rob a bank in Paris in real time, handing out the stolen loot to the Vegas audience Robin-Hood style.

The outrageous stunt attracts the attention of the FBI, with lead detective Dylan (Mark Ruffalo) on the case. A comely French agent, Alma (Melanie Laurent), is brought in by Interpol to assist, and sparks fly between the two.

Also on the prowl is Thaddeus Bradley (Morgan Freeman), a former magician turned reality show host, whose mission is to expose the secrets of the trade. Thaddeus is determined to reveal the Four Horsemen as petty thieves with more bank heists in their future.

The chase is on, from Vegas to New Orleans and beyond, with the Four Horsemen always one step ahead of the law. As Daniel tells Dylan, “The first rule of magic is to always be the smartest guy in the room.”

There’s a major twist in store that borders on the preposterous, and those tarot cards introduce a slightly disturbing pagan element. But in the end, “Now You See Me” is a harmless and witty romp for grown-ups — one that lingers in the memory, though, no longer than the time required to shout, “Abracadabra!”

The film contains mild action violence, a vulgar gesture, sexual innuendo, and some crude and profane language. The Catholic News Service classification is A-III — adults. The Motion Picture Association of America rating is PG-13 — parents strongly cautioned. Some material may be inappropriate for children under 13.

PREVIOUS: ‘After Earth’: Will Smith and son can go home again, but should they?