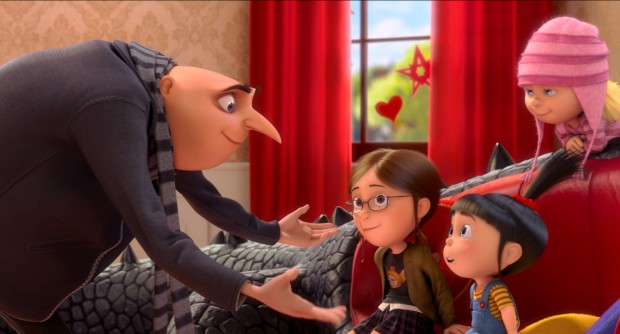 NEW YORK (CNS) — The transformative power of both romantic love and family affection is showcased in the sweet animated sequel “Despicable Me 2” (Universal).

Co-directors Chris Renaud and Pierre Coffin’s follow-up to their 2010 feature makes for a thoroughly endearing comedy and provides morally suitable entertainment for family members of all ages.

Once again, the plot centers on Gru (voice of Steve Carell), the never very wicked and now thoroughly reformed villain whose conversion was charted in the last outing.

Gru’s change of heart was brought about by the three little orphan girls — Margo (voice of Miranda Cosgrove), Edith (voice of Dana Gaier) and Agnes (voice of Elsie Fisher) — who are now his adoptive daughters. So it’s no surprise that early scenes find him devoting himself to fatherhood and to starting a respectable business making jams and jellies.

Preserves will have to wait, however, once the super-secret Anti-Villain League — AVL for short — comes calling in the person of Agent Lucy Wilde (voice of Kristen Wiig). Lucy and her boss, Silas Ramsbottom (voice of Steve Coogan), want to enlist Gru’s help in identifying the perpetrator of a crime of global significance and in foiling his plan for world domination.

As Gru and Lucy pursue their crusade together, Gru’s initially antagonistic attitude toward his new partner gradually gives way to softer feelings, especially after she intrepidly rescues him from a disastrous blind date. Romance blooms, much to the satisfaction of the girls. They’ve been concerned from the outset that their much-loved dad is lonely. Additionally, Margo in particular feels the absence of a maternal influence in her life.

Much of the comedy in the previous picture arose from the misadventures of Gru’s multitude of diminutive, Twinkie-like minions. Here, they continue to supply laughs as they quarrel comically among themselves and mumble incomprehensibly but amusingly in a nonsense language voiced by Renaud and Coffin.

“Despicable Me 2” resorts to some potty humor that grown-ups may not welcome, as when the achievements of Gru’s inventive sidekick Dr. Nefario (voice of Russell Brand) are honored with a 21-fart-gun salute. And the cartoonish violence and threatening situations that arise as the story unfolds might upset the smallest and most easily frightened youngsters.

Still, a warm-hearted spirit prevails throughout the overwhelmingly innocent proceedings.

The film contains occasional, mostly mild scatological humor and a few perilous situations. The Catholic News Service classification is A-I — general patronage. The Motion Picture Association of America rating is PG — parental guidance suggested. Some material may not be suitable for children.

NEXT: Churches’ support for interfaith marriages focus of new study