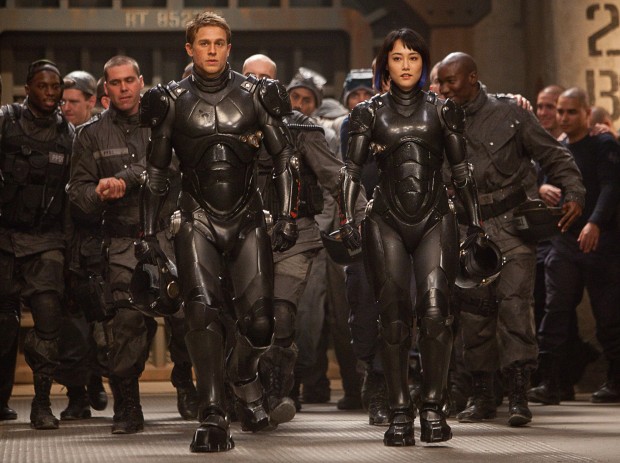 NEW YORK (CNS) — Anyone with a hankering for a 21st-century Godzilla movie, or anxiously awaiting the next “Transformers” installment, will cheer the advent of “Pacific Rim” (Warner Bros.).

Those not clamoring for either of the above yet amenable to an escapist sci-fi spectacle (also available in 3-D and Imax) should also welcome it.

The only major content pitfalls are intermittent bad language and the genre’s usual blind spot concerning the destruction and suffering endured prior to someone or something saving the day. Unnerving rather than morally inappropriate, the action is too intense for children.

In the very near future, a breach at the bottom of the Pacific Ocean becomes a portal for alien monsters redolent of Godzilla, the mutant marauder of 1950s Japanese cinema. The first wave of Kaiju, Japanese for “giant beast,” attacks San Francisco, Manila and Mexico’s Baja Peninsula.

The world’s armies eventually repel them using tanks and aircraft, but it’s obvious a new kind of weapon is needed. So nations band together to construct huge robots called Jaegers, after the German word for fighters. Humans operate the machines, yet to fully control them the minds of two pilots must be melded through a neural bridge.

In an early scene, Raleigh Becket (Charlie Hunnam) and his brother Yancy (Diego Klattenhoff) take their Jaeger into battle off the coast of Alaska. When they disobey orders and rescue a fishing vessel, their mission goes tragically awry and Raleigh quits the pilot corps. Five years later, world leaders decide to decommission the Jaegers and build a wall to protect mankind.

The soldier in charge of the Jaeger program, Stacker Pentecost (Idris Elba), enlists Raleigh’s help in a last-ditch plan to stop the increasingly destructive incursions using the four remaining robots. From a Hong Kong base, Chinese, Russian and Australian teams, along with Raleigh and an untested female pilot Mako Mori (Rinko Kikuchi), try to seal the breach with a nuclear warhead.

The fate of everyone on earth rests in the hands of a small group of intrepid soldiers and engineers. Comic relief is provided by Dr. Newton Geiszler (Charlie Day), a whiny scientist who attempts a mind meld between a human and a Kaiju. Meaningful human interactions are woven into the story — for example, testosterone-fueled friction amongst rival pilots and romance between Raleigh and Mako-but they’re incidental.

“Pacific Rim” is primarily interested in our fascination with monsters, machines and mayhem. And there’s no one better to imagine fantasy, fear and fisticuffs on a massive scale than Mexican filmmaker Guillermo del Toro, the genius behind the “Hellboy” movies and critically acclaimed titles such as “Pan’s Labyrinth” and “The Devil’s Backbone.”

For his most commercial project to date, del Toro collaborated with Industrial Light & Magic (“Star Wars”) to fashion special effects that often trigger awe. The overall design is dominated by steel and iron — even the Kaiju appear more synthetic than organic — which contributes to the film’s dark look. Constant rainfall and setting the majority of sequences at night on the surface of, or beneath, the sea accentuates the murkiness. Still, it’s difficult to gainsay the stunning visuals.

Del Toro and co-screenwriter Travis Beacham take a minimalist approach to exposition, doling out information with a breezy confidence that discourages questions. Whether everything passes scientific muster, the shortage of details makes for a smoother ride. That said, any glossing over of the incalculable devastation and loss of life that occurs en route to civilization being saved is troubling.

Using the selfless heroism of the principal combatants to highlight the strength of the human spirit constitutes action-movie boilerplate. A slightly less common theme is the solidarity exhibited by the peoples and governments of the world when a common enemy surfaces.

Undoubtedly, mankind coming together and using technology to thwart an alien invasion is a positive thing. In reality, however, it’s much more probable that men will use killing machines like Jaegers against one another. We may flock to summer movies to forget about real-life problems for a short time, but there’s no escaping the fact that this scenario is more frightening than computer-generated Kaiju rising from a virtual sea.

The film contains much intense but bloodless sci-fi violence between robots and alien creatures, brief sexual banter and occasional crude and profane language. Possibly acceptable for older teens. The Catholic News Service classification is A-III — adults. The Motion Picture Association of America rating is PG-13 — parents strongly cautioned. Some material may be inappropriate for children under 13.

NEXT: ‘The Conjuring’ skews exorcism as creepy carnival