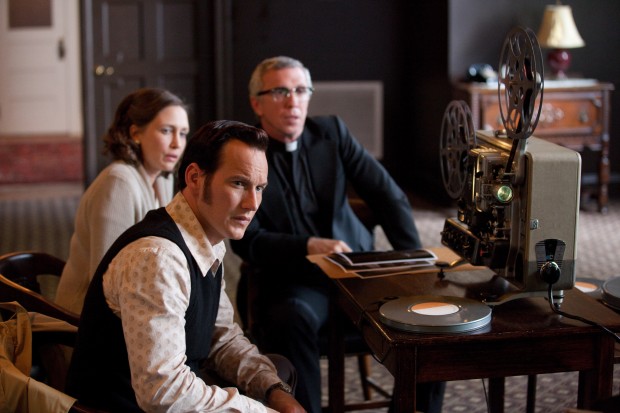 Patrick Wilson, Vera Farmiga and Steve Coulter star in a scene from the movie "The Conjuring." (CNS photo/Warner Bros.)

The demons get a presumption of truth and the run of the plot, while the solemn rite of exorcism is reduced to a kind of voodoo practiced by entrepreneurial ghostbusters with dubious credentials in cobwebbed New England basements.

Then again, the value of horror films is measured by authentic scares, not theology, no matter how bent out of shape. “The Conjuring” has many intelligent, stylishly rendered frights, usually involving apparitions popping out of the dark in tight confines. It’s satisfyingly high on the jolt meter and other genre conventions, but sub-par on Catholicism — not in a derogatory manner, mind you, but unburdened by pesky things like, oh say, facts.

It’s the story of real-life paranormal investigators and “demonologists” Ed and Lorraine Warren (Patrick Wilson and Vera Farmiga), the couple responsible for uncovering, among other famous ghosts, the Amityville Horror. Like all Warren exploits, it’s based on a “true story,” and the screen informs us that Ed (who died in 2006) was the only American layman permitted by the Catholic Church to perform exorcisms.

That claim is redolent of the hinky-dink aroma of a carnival midway, but the Warrens always used their Catholicism to give themselves credibility with the public, if not exactly a firm seal of approval from church authorities. This story is set in 1971. In 1985, Cardinal Joseph Ratzinger (the future Pope Benedict XVI), then head of the Vatican Congregation for the Doctrine of the Faith, banned laypeople from performing the exorcism rite.

Anyway, exorcisms require the approval of a bishop. In this film, a parish priest just says he’ll call the Vatican. The approval doesn’t come in time, so the Warrens, like John Wayne at the Alamo, cast out the demon themselves, scattering crucifixes about. Otherwise, there’d be no big finish.

The property has long been cursed with a demon that infiltrates first the household, then the mother, forcing her to kill her children. That’s what happened in the 19th century to a quite immense woman named Bathsheba, who occasionally pops up along with ghosts of her daughter, whom she hanged, and her son, slain with a big knife. For good measure, a demon-possessed doll skitters around and leaves notes.

Carolyn gets the worst of it, of course, since the demon squeezes her hard enough to leave bruises before taking her over entirely. Adding to the spookiness, it turns out that the Perrons never had their daughters baptized, since they’re not at all religious. An actual departure to the gates of hell must have been too much for the film’s budget, however, since that’s not shown.

NEXT: ‘RED 2’: Seniors up to challenge of saving the world, again