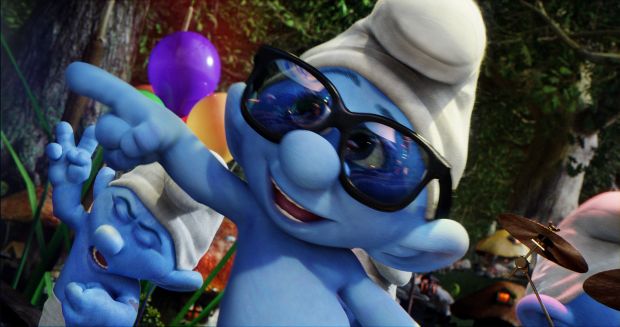 Smooth Smurf, voiced by Shaquille O'Neal, is seen in the animated movie "The Smurfs 2." (CNS photo/Columbia)

NEW YORK (CNS) — If summer’s speedy passing has you feeling blue, then head to “The Smurfs 2” (Columbia) for a jolly pick-me-up. The lighthearted tone of this 3-D sequel — which, like its 2011 predecessor, mixes animation with live action — comes courtesy of the familiar azure-hued elves of the title.

Young children will be enchanted and laugh themselves silly, while their parents will appreciate the script’s positive messages about friendship and family — potty jokes notwithstanding.

Picking up from the events of the first big-screen outing, evil human wizard Gargamel (Hank Azaria) remains obsessed with the squishy, sky-colored creatures. He wants the formula for “Smurf-essence,” which promises eternal beauty and unlimited power.

Gargamel fashions his own elves to infiltrate Smurf Village. The first mole he created, the blond-tressed Smurfette (voice of Katy Perry), failed him. She was turned — as they say in the world of espionage — and is now one of the family.

So Gargamel tries again with two new beings whom he dubs the Naughties: Vexy (voice of Christina Ricci) and Hackus (voice of J.B. Smoove).

Vexy kidnaps Smurfette and returns her to Gargamel, who has set up shop in Paris as a celebrity sorcerer, playing the city’s famed Opera House nightly.

Papa Smurf (voice of Jonathan Winters, in his last film role) must rally the troops to rescue Smurfette before she is forced to reveal the formula — an eventuality which would, we are told, unleash “total Smurf-ageddon.” Joining him are Clumsy (voice of Anton Yelchin), Grouchy (voice of George Lopez) and Vanity (voice of John Oliver).

Much like the dwarves in “Snow White,” a Smurf’s name is a good indication of his character and temperament.

As the search for Smurfette barrels along, the City of Light has never looked lovelier — or bluer. Amid the slapstick action sequences, there’s a lot of talk about family, especially parentage. Does Smurfette owe allegiance to her real “father,” Gargamel, or to Papa Smurf, who welcomed her to Smurfdom?

“It doesn’t matter where you come from,” Papa Smurf instructs. “What matters is who you choose to be.”

There’s more, as “The Smurfs 2” concludes with a surprisingly pro-life message: “Life is the most precious thing,” Papa Smurf intones. “We must protect it.”

May young and old alike absorb that bit of Smurf-essence.

The film contains moderately intense action sequences, some slapstick violence and mild scatological humor. The Catholic News Service classification is A-I — general patronage. The Motion Picture Association of America rating is PG — parental guidance suggested. Some material may not be suitable for children.

NEXT: Top 10 parables of faith on screen