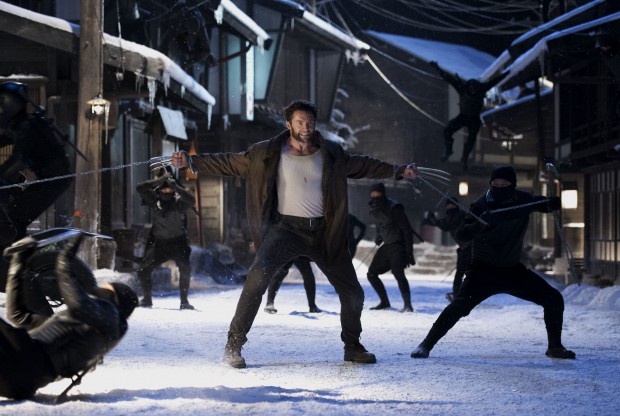 Hugh Jackman stars in a scene from the movie "The Wolverine." (CNS photo/Fox)

NEW YORK (CNS) — Does the idea of a giant suit of samurai armor made out of an indestructible — but, alas, fictional — alloy called adamantium strike you as the coolest thing ever? If so, then the macho superhero adventure “The Wolverine” (Fox) might just be the movie for you.

Viewers addicted neither to outsized gadgetry nor to the Marvel Comics X-Men mythos of which this is an extension, however, may find director James Mangold’s action picture a heavy lift. That’s largely due to the physical and emotional angst endured by the titular character (Hugh Jackman) who also goes by the more casual handle Logan.

Ostensibly, Logan would seem to have a lot going for him. Not only can he sprout tougher-than-steel (i.e., also adamantium) claws from his hands at a moment’s notice, but his body has miraculous powers of self-healing too.

Ay, but there’s the rub: Logan’s invulnerability has resulted in virtual immortality. And, after more than a century of hanging around, he’s as bored, blase and downright world-weary as any 1950s French philosopher. Then there’s the fact that, along the way, he accidentally killed his true love. Darn!

Perhaps a trip to exotic Japan might alleviate the blues? To justify the jaunt, we open on flashbacks of World War II that find Logan a POW sweating it out in a heavily reinforced hot box that happens to be located across the bay from the doomed city of Nagasaki. As the mushroom cloud looms, Logan saves the life of one of his captors, an officer named Yashida (Ken Yamamura).

Flash forward to the present, and the aged but eternally grateful Yashida (Haruhiko Yamanouchi), now a fabulously wealthy industrialist (what else?), is facing death. He summons his old friend for a final visit.

Naturally, Yashida has a fetching granddaughter, Mariko (Tao Okamoto), whose position as his heir makes her a target for bad guys. How many tattooed Yakuza types can Logan’s built-in Ginsu knives slice and dice? Um, quite a lot.

Fortunately, the relentless combat involves only moderate gore, and occasional flashes of wit offer some relief from the fog of testosterone.

Less welcome is the fact that Logan and Mariko not only fall for each other, but fall into bed together as well. They do so despite the obvious detail that Logan’s mark-of-Cain lifestyle does not exactly lend itself to long-term commitments.

Additionally, a scene where the otherwise conventionally heroic Logan almost murders one of the principal villains (played by Brian Tee) in cold blood — Logan averts the guilt of killing him only by accident — will not sit well with morally mature audience members.

The film contains constant action violence with some blood, ritual suicides, a nonmarital bedroom scene, rear nudity, mature references, at least one use of the F-word and occasional crude and crass language. The Catholic News Service classification is A-III — adults. The Motion Picture Association of America rating is PG-13 — parents strongly cautioned. Some material may be inappropriate for children under 13.

PREVIOUS: ‘RED 2’: Seniors up to challenge of saving the world, again

NEXT: Movie review – The Smurfs 2