Buddies of ‘2 Guns’ shoot through corruption, betrayal, crime — with laughs 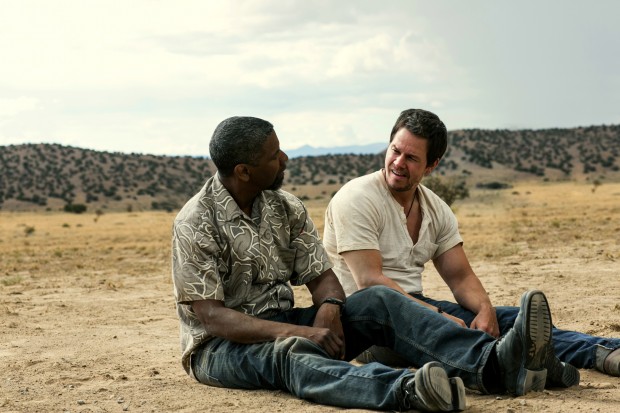 Denzel Washington and Mark Wahlberg star in a scene from the movie "2 Guns." The Catholic News Service classification is L -- limited adult audience, films whose problematic content many adults would find troubling. The Motion Picture Association of America rating is R -- restricted. Under 17 requires accompanying parent or adult guardian.(CNS photo/Universal)

NEW YORK (CNS) — If the buddy movie “2 Guns” (Universal) is to be believed, the government of the United States is riddled with greed, venality, law-flouting and violent immorality.

Fortunately, however, this genre-melding blend of action and comedy clearly revels in its own outrageousness. So its freewheeling political cynicism need not be taken too seriously.

What potential viewers will need to weigh more conscientiously are the elements that make the appropriate audience for this picture a small one. Though clever at times, the proceedings are also frequently coarse — and occasionally brutal.

Not realizing that they have both been sent undercover by their respective government agencies to bust the same Mexican drug lord — a black hat called Papi Greco (Edward James Olmos) — Bobby and Stig naturally mistake each other for real criminals. Though pretending to be partners for the time being, both take it for granted that the other will be trapped — quite deservedly — in the sting that fells Greco.

No sooner is this mix-up resolved than a whole series of corruption-driven complications follows in its wake. Most of these involve yet more federal employees: Bobby’s colleague — and, as we’re shown, his on-again-off-again lover — Deb Rees (Paula Patton), Stig’s boss Quince (James Marsden) and a tough-as-nails political wire-puller known only as Earl (Bill Paxton).

Since many of the circumstances are too farfetched to bear scrutiny, moviegoers’ reactions will largely depend on their taste for implausible — but occasionally giddy and amusing — plot developments.

The arc of events leads predictably toward the formation of a bond between the main characters. Their friendship is forged, however, against a gritty background, one that presents us with scenes of torture as well as with the fleeting sight of a severed head.

As a result of their dealings with Greco, at one point Bobby and Stig are forced to make their way back north of the border in the company of a group of undocumented immigrants who are being guided by so-called coyotes. Though the incident is not without its ironic impact, any sober-minded effect is more than a little undermined by the fact that Stig treats the journey, at least in retrospect, as something of a lark.

The film contains much violence, some of it harsh and gory, a nonmarital bedroom scene with upper female nudity, a few uses of profanity and constant rough and crude language. The Catholic News Service classification is L — limited adult audience, films whose problematic content many adults would find troubling. The Motion Picture Association of America rating is R — restricted. Under 17 requires accompanying parent or adult guardian.

NEXT: Movie review: The Way, Way Back