Movie review: The Way, Way Back 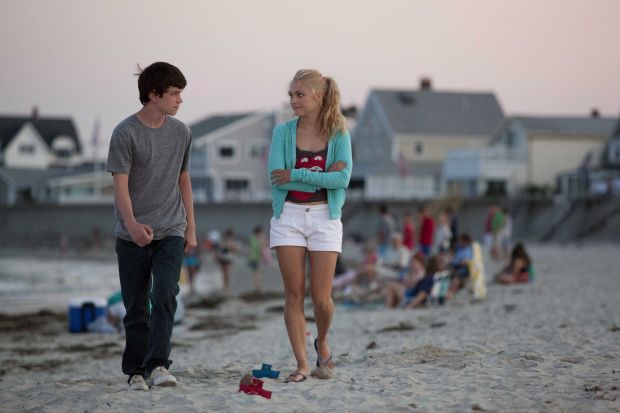 Liam James and AnnaSophia Robb star in a scene from the movie "The Way, Way Back." (CNS photo/Fox Searchlight)

NEW YORK (CNS) — A potentially nostalgic summer vacation spent by the sea is tinged with family problems and teen angst in “The Way, Way Back” (Fox Searchlight).

Co-directed by newcomers Nat Faxon and Jim Rash — who also wrote the clever screenplay — this coming-of-age comedy-drama provides a kind of what-not-to-do manual for prospective parents. It forcefully demonstrates the devastating effects of divorce on children as well as the damage caused by the absence of responsible adult care.

As summer break begins, 14-year-old Duncan (Liam James) is miserable, sitting by himself in the (way, way) back seat of an old-fashioned station wagon on the way to the coast. The retro car is the pride and joy of Duncan’s divorced mother Pam’s (Toni Collette) boyfriend, Trent (Steve Carell).

Trent, also divorced, is a monster narcissist without regard for anyone but himself, let alone the lovesick Pam. Oblivious to Duncan’s feelings, he demands to know, “On a scale of 1 to 10, what do you think you are?”

After a while, Duncan reluctantly responds that he is a 6.

“I think you’re a 3!” Trent insists. And the relationship goes downhill from there.

That’s par for the course as far as parenting is concerned in this film. The adults are all self-absorbed and clueless when it comes to the needs of their children, who accordingly grow up rootless and amoral.

The carload of passengers, which includes Trent’s obnoxious daughter Steph (Zoe Levin), decamps at Trent’s beach house. There Betty (Allison Janney), Trent’s busybody lush of a neighbor, oversees the social scene. As the adults party hearty, the kids are left to their own devices.

Duncan is out of his element, ridiculed by the cooler teens. He is pitied — then befriended — by Betty’s daughter Susanna (AnnaSophia Robb) who is repelled by her mother’s lifestyle. Together they display a degree of maturity light-years ahead of their feckless elders.

Finding a girl’s bike in the garage, Duncan takes flight. He lands at the Water Wizz fun park, managed by Owen (Sam Rockwell). A big kid himself, Owen is carefree and goofy. But he sees something of himself in Duncan’s insecurity, and decides to take him under his wing, becoming his mentor and friend.

Duncan finds a new family in the misfit employees at the rundown park, discovering the happiness and friendship so lacking at home. He gains confidence to stand up to Trent and his philandering ways, hoping to extricate his mother from a bad situation.

“The Way, Way Back” is to be commended for portraying the friendship between Owen and Duncan as natural and innocent, a surrogate father-son bond that is mutually beneficial. It is devoid of the sordid sexual content one half-expects from Hollywood these days.

The film contains an adulterous relationship, acceptability of divorce, implied nonmarital sex, drug use, underage drinking and frequent crude and profane language. The Catholic News Service classification is A-III — adults. The Motion Picture Association of America rating is PG-13 — parents strongly cautioned. Some material may be inappropriate for children under 13.

NEXT: Movie review – We’re the Millers