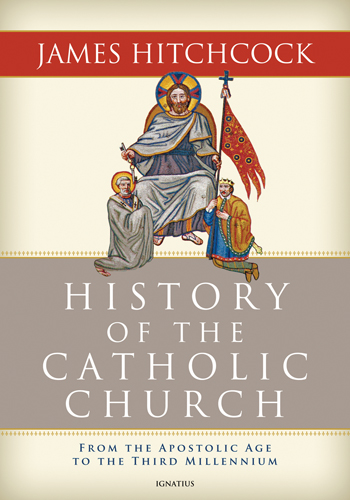 In “History of the Catholic Church: From the Apostolic Age to the Third Millennium,” James Hitchcock, a longtime professor of history at St. Louis University, argues successfully that the Gospel in all its fullness was contained at the beginning in “seed” form, and the church came to know more and more deeply the truths of the mystery of faith as the centuries wore on.

Theological issues such as the nature of Christ are explained with admirable clarity, a real accomplishment given the subtleties of the arguments and the differences between early Christian Greek and modern English.

Whenever the Eastern church became a seedbed of heretical ideas, Rome took the orthodox side. Theodore of Mopsuestia, who died in 428, misled Nestorius, a patriarch of Constantinople, over the nature of Christ. This became a long-standing heresy in the Byzantine East, with Nestorian Christians struggling with their second-class status in the empire. Many embraced the new religion, Islam, preferring the Muslim Arabs to the old empire.

Yet the author, offering balance, explains that one reason for papal orthodoxy was the bishop of Rome’s frequently tenuous position, being threatened first by the Roman empire and afterward by various Germanic tribes, and then during the ninth and 10th centuries by the quarrelsome Roman nobles who brought it to its lowest point. Constantinople enjoyed the peace and prosperity necessary for theological dispute to arise.

Despite corruption, which often dogged the hierarchy throughout Europe, readers will get a sense of how the church has built up an enduring legacy of truth. Whatever the topic, the author tends to remain close to the historical action, offering a long line of individuals and movements who played leading roles in every era. He describes, for example, the life and teaching of St. Augustine of Hippo well enough, and shows the continuity of doctrine throughout the centuries by referring again and again to how certain thinkers throughout the centuries were influenced by this great saint.

Thus the Augustinian St. Bonaventure, Thomas Aquinas’ contemporary, remained much less influenced by Aristotle’s philosophy than Aquinas, and tended to write treatises that explained the mystical life and the possibility of inward illumination. Aquinas rejected that kind of knowledge, and turned to reason and Scripture as the main pillars of the faith. Hitchcock portrays the intellectual ferment of the high Middle Ages well: “Daringly, Aquinas affirmed Aristotle’s principle that all knowledge begins with sense knowledge, without which the mind is a blank state. Aquinas was a firm realist.”

When portraying such movements as medieval scholasticism, Hitchcock carefully avoids branding the entire age as falling under one intellectual tendency, touching on other important thinkers. One misfit, Meister Eckhart, though Dominican and therefore officially Thomist, famously taught inner illumination closer to Eastern Christianity and the Augustinians.

Hitchcock explains the spirit behind each epoch. In referring to the patristic age, for example, he observes, the church fathers “wrote not in a spirit of abstract speculation but with the sense that the welfare of souls was at stake.” When referring to Martin Luther, he shows how the Protestant did not fit into the humanist movement at the time, though like the humanists Luther rejected scholasticism as a distortion of earlier teaching. Luther was a medieval man, an Augustinian, who did not intend to tear the church apart but whose uncompromising personality made reconciliation with Rome all but impossible.

With a wide-ranging perspective, “History of the Catholic Church” focuses on oft-ignored areas, such as India, Quebec and the Philippines, and offers a fascinating account of the evangelization of China. The author also takes a broad view, showing that, particularly with the Enlightenment, the Western world became increasingly divided socially, politically and intellectually between those seeking to break down church authority and those trying to preserve it.

Though the author does mention popular piety and the common man, this book revolves around the intellectual and institutional history of the church. Readers interested in this will get what they are looking for, though a deeper discussion on ancient and medieval liturgy would have added to the book.

The most satisfying aspect of “History of the Catholic Church” is the lack of defensiveness over the past and present. Hitchcock assumes the supernatural foundations of the church and leaves the reader with a sense of the great journey that the barque of Peter has taken since its foundation.

NEXT: ‘The World’s End’ starts in pubs, ends with intelligence