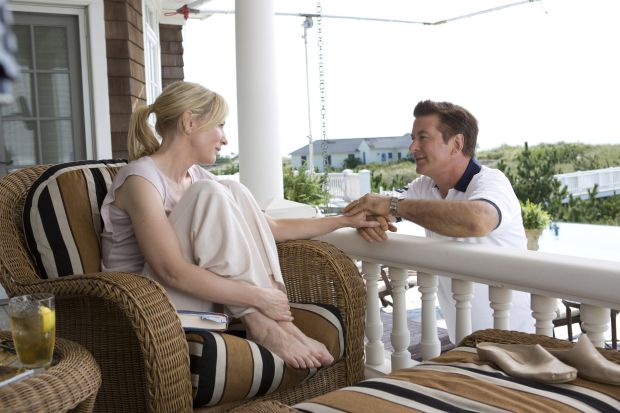 NEW YORK (CNS) — At his best, Woody Allen is a brilliant writer-director of comedic films as insightful as they are hilarious. But in his latest venture, “Blue Jasmine” (Sony Classics), Allen turns the lights down low, presenting the dark and depressing tale of a crazed woman whose life is spiraling out of control.

The grim tone comes as no real surprise, though, since Allen’s inspiration here is Tennessee Williams’ classic play “A Streetcar Named Desire.” Thus his title character, played by Cate Blanchett, experiences a decline that parallels the deterioration of Williams’ doomed heroine Blanche DuBois.

Unfortunately, despite a bravura performance by Blanchett, “Blue Jasmine” misfires by trying to derive most of its humor from Jasmine’s mental illness — anything but a laughing matter.

In a story that might have been ripped from the headlines, Jasmine is a Park Avenue socialite fallen on hard times. She had no idea her high-rolling financier husband, Hal (Alec Baldwin), was both a philanderer and a fraud.

Hal’s Ponzi-like scheme, which destroyed the fortunes of his investors, has landed him in prison and Jasmine on the street. Already delusional and an alcoholic, she suffers a nervous breakdown.

With nowhere to turn, Jasmine heads west for San Francisco, to move in with her sister Ginger (Sally Hawkins). It’s a risky choice, as Ginger and her ex-husband, Augie (Andrew Dice Clay), invested in Hal’s enterprise and lost their life savings, which in turn destroyed their marriage.

To Ginger’s credit, she puts familial bonds above past hurts, and shelters Jasmine. But Jasmine’s gratitude quickly turns to disgust. She’s repelled by Ginger’s middle-class lifestyle and, especially, by her beefy mechanic boyfriend, Chili (Bobby Cannavale).

As she descends into madness on a diet of vodka and Xanax, Jasmine strikes out in all directions. She makes a stab at self-improvement, taking a receptionist job and computer classes. She also decides to remake Ginger’s seemingly happy life, encouraging her to dump Chili and seek a “better” match in respectable salesman Al (Louis C.K.) — with disastrous results.

But Jasmine is not made for hard labor or study, only for shallow appearances. She finds a potential means of escape in Dwight (Peter Sarsgaard), a wealthy diplomat with political ambitions.

Jasmine puts on a good show, concealing her past while presenting herself as an ideal and sophisticated partner. She comes close to pulling it off.

In the end, “Blue Jasmine” plays the selfish card. It’s every character for him- or herself, seemingly without concern for the welfare of others, least of all Jasmine.

The film contains cohabitation, implied nonmarital sexual activity, an adultery theme and much profane and crude language. The Catholic News Service classification is L — limited adult audience, films whose problematic content many adults would find troubling. The Motion Picture Association of America rating is PG-13 — parents strongly cautioned. Some material may be inappropriate for children under 13.