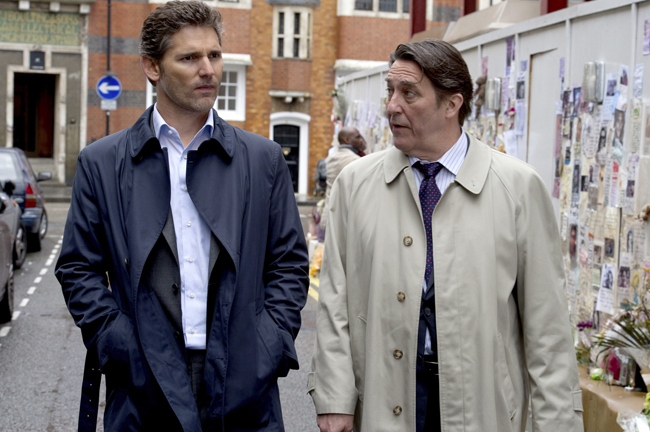 NEW YORK (CNS) — Polished but plodding, the British thriller “Closed Circuit” (Focus) also adopts a morally dubious stance toward marital fidelity. With an adulterous affair looming in the background of its plot, the film, as scripted by Steve Knight, acknowledges the damage wreaked by unfaithfulness, yet allows the prospect of a happy romantic outcome based on it to remain.

The sinful dalliance in question comes back to haunt lawyers Martin Rose (Eric Bana) and Claudia Simmons-Howe (Rebecca Hall) when circumstances reunite them as partners on a high-profile case.

In the wake of the bombing of a crowded London market, Turkish immigrant Farroukh Erdogan (Denis Moschitto) has been accused of being the terrorist mastermind behind the attack. Because of the national security implications of the incident, Claudia has been appointed by the court to serve as Erdogan’s special advocate. As such, she will have access to classified documents that his regular attorney will not.

When Erdogan’s initial defense counsel commits suicide on the eve of the trial, hard-driving Martin is called on to succeed him, and thus accidentally pushed into unsought professional collaboration with Claudia. This is all the more inconvenient because their past connection is supposed to be an ethically disqualifying impediment to their current association. So they both compound their previous wrongdoing by lying about the matter under oath.

Assisted by Martin’s old friend and senior colleague Devlin (Ciaran Hinds), Martin and Claudia uncover evidence that the case has been rigged by MI5, the U.K.’s military intelligence service. They manage to do so despite the best efforts of MI5’s barely undercover representative in the situation, agent Nazrul Sharma (Riz Ahmed), to throw them off the scent.

The fact that the nation’s attorney general, played by Jim Broadbent, is also out to thwart Martin and Claudia shows that the conspiracy they’re attempting to reveal is supported at the highest levels of the legal establishment.

If that implication seems more than a little farfetched, it’s not the only detail in director John Crowley’s semi-paranoid picture that strains credulity. Knight’s screenplay, after all, also portrays government spies as resorting to the murder of their fellow citizens on a routine basis.

Back on the marriage vows front, meanwhile, divorced dad Martin bemoans the harm his liaison with Claudia has done to his family life. But there’s still a sunset to be walked into, and it’s a pretty good bet who will be taking that hand-in-hand stroll.

The film contains occasional scenes of violence, mature themes, including adultery and suicide, at least one use of profanity and a handful of rough and crude terms. The Catholic News Service classification is A-III — adults. The Motion Picture Association of America rating is R — restricted. Under 17 requires accompanying parent or adult guardian.

PREVIOUS: ‘The World’s End’ starts in pubs, ends with intelligence