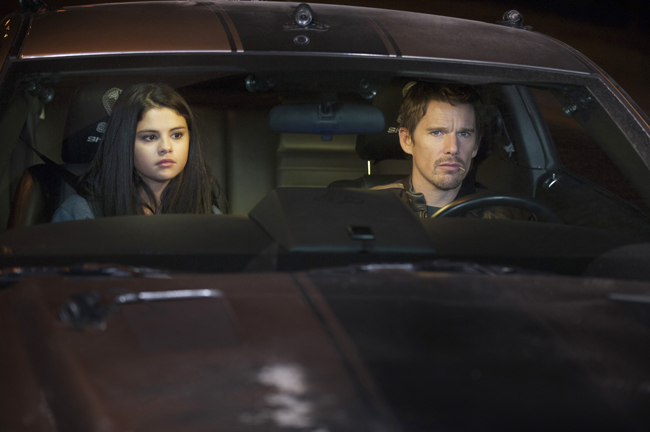 NEW YORK (CNS) — Can the trauma of having your wife kidnapped make you drive faster and more, um, furiouser? Ethan Hawke finds out in the senseless car-chase flick “Getaway” (Warner Bros.).

Hawke plays ex-racer and devoted hubby Brent Magna. Poor Brent’s yuletide gets off to a bad start when he returns to his apartment to find that his lovely spouse Leanne (Rebecca Budig) has been violently abducted while decorating their Christmas tree.

And you thought Grandma getting run over by that reindeer was a bummer!

Well, anyway, it seems that the unnamed criminal mastermind (Jon Voight) behind the whole thing isn’t after a ransom. Instead, he wants Brent to use a souped-up vehicle he’s purloined to cause mayhem on the streets of Sofia, Bulgaria, in order to facilitate a bank heist he’s planning.

On the whole, moviegoers would do well to take this woeful picture’s title as a piece of friendly advice.

What’s a red-blooded American like Brent doing in exotic Sofia? A belated exchange of dialogue eventually informs us that it’s Leanne’s hometown and that Brent and Leanne moved there after Brent said goodbye to the speedway. And fire-sale production costs had nothing to do with it.

No sooner has Brent begun to follow orders than his designated auto’s teenage owner (Selena Gomez) — who also remains nameless throughout — shows up, waving a gun and demanding her classy chassis back.

Brent, who no doubt recognizes Selena from the Disney Channel, or perhaps “Ramona and Beezus,” is having none of that. So the hood toting Miss Anonymous winds up becoming first Brent’s unwilling passenger and later his computer-savvy partner in the ongoing effort to foil his adversary.

Though Brent refuses a direct order to kill what’s-her-name, director Courtney Solomon does place him in the morally shaky position of endangering hordes of innocent bystanders — and innumerable pursuing police officers — for the sake of safeguarding a single life. But ethical considerations take a back seat as the wheels squeal and the windshields shatter — and as viewers run a gauntlet of crashes, collisions and illogical plot developments.

Since Brent only has eyes for the absent Leanne, there’s no bedroom detour on his journey. But Selena puts distance between herself and her magical-kingdom past by labeling everyone she doesn’t like with the A-word. Presumably for variety’s sake, on one occasion, she settles for flipping some opponent the bird instead.

On the whole, moviegoers would do well to take this woeful picture’s title as a piece of friendly advice.

The film contains much action violence, a few uses of profanity, considerable crude and crass language and an obscene gesture. The Catholic News Service classification is A-III — adults. The Motion Picture Association of America rating is PG-13 — parents strongly cautioned. Some material may be inappropriate for children under 13.

NEXT: In ‘The Grandmaster,’ everybody’s kung fu fighting, with honor