Parents may have some explaining to do with ‘Percy Jackson: Sea of Monsters’ 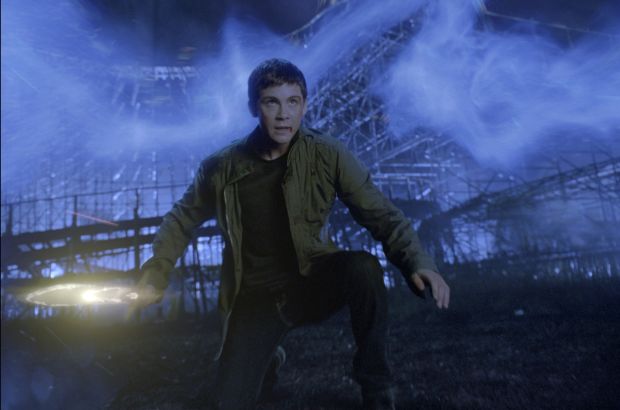 Parents will want to be aware, for instance, that the mythological elements underlying the franchise as a whole seem to be emphasized with increased forcefulness in this go-round, and that a passing reference to Christianity in the script is at best ambiguous.

Indeed, the very first line of narration, spoken by the title character — played, once again, by Logan Lerman — informs us that the gods of Mount Olympus “are real.”

Given that Percy is a modern-day demigod whose father is the Greek ruler of the seas, Poseidon, that idea may be said to be implicit in the set-up. And it will come as no surprise either to readers of Rick Riordan’s series of novels for young people or to viewers of this film’s predecessor, 2010’s “Percy Jackson & the Olympians: The Lightning Thief.”

Still, considering the impressionable demographic at which director Thor Freudenthal’s adaptation of Riordan’s second volume is presumably aimed, a little hedging of metaphysical bets would have been appreciated.

Percy’s assertion comes at the start of some cumbersome exposition, the upshot of which is that he needs to embark on a quest to find the Golden Fleece. Otherwise, the bucolic safe haven within which he and others of his kind — known as “half-bloods” — like to hang out and train will become vulnerable to attack.

So a-questing he does go, accompanied by his two best friends: a satyr named Grover (Brandon T. Jackson) and the goddess Athena’s daughter Annabeth (Alexandra Daddario). Also tagging along is Percy’s newly discovered half-brother Tyson (Douglas Smith), the product, so we’re informed, of one of Poseidon’s dalliances with a sea-nymph.

Although endowed with a very pleasant personality, Tyson belongs physically to a race of monsters whose characteristic feature earns them the politically correct moniker “ocularly challenged.” Tyson’s presence on the scene thus introduces two of the films positive themes: sibling solidarity — Percy keeps giving affectionate Tyson the brush-off — and tolerance toward those perceived as different — Annabeth doesn’t trust Tyson’s type.

They’ll all need to make nice, however, since they’re not the only ones looking for the magical hide. Percy’s condescending rival for leadership of Camp Half-Blood, war-god Ares’ intrepid daughter Clarisse (Leven Rambin), is leading an expedition of her own. And divine messenger Hermes’ rebellious son Luke (Jake Abel) is also after the wondrous wool, hoping to use it for his own — characteristically nefarious — purposes.

Special effects-generated creatures take priority over human characters in the adventures that ensue. But they do at least give Percy the chance to get his mojo back — he’s been doubting himself lately, as early scenes show. And Percy will need to bury the hatchet with Clarisse if they are to stand any chance of thwarting Luke.

So, to tolerance and brotherly togetherness, add lessons about youthful self-confidence and the value of reconciliation with opponents.

Back at camp, meanwhile, patron of wine drinkers Dionysus (Stanley Tucci) — aka “Mr. D” — tells us that he is out of favor with Zeus following the revelation that the two gods were both chasing the same nymph (or naiad or some such fetching creature).

As a result, Zeus keeps torturing Mr. D by turning his cherished wine into water as soon as he pours it into a glass. Fair enough, but this sets up a joking reference to the fact that “the Christians” have a god who can do this “trick” in reverse. “Now there,” Dionysus exclaims jealously, “is a god!”

Adult moviegoers can charitably interpret the remark as a form of winking affirmation, the offensive term “trick” notwithstanding. But youngsters may not know what to make of it, especially given the context.

Despite such troublesome interludes, however, even cautious moms and dads will likely find “Percy Jackson: Sea of Monsters” acceptable for older adolescents. All the more so, as it could provide the opportunity for a valuable discussion of the differences between scriptural faith and belief in the deities of classical mythology.

The film contains steady but mostly bloodless violence, pagan themes, an irreverent joke and a few mildly crass terms. The Catholic News Service classification is A-III — adults. The Motion Picture Association of America rating is PG — parental guidance suggested. Some material may not be suitable for children.

NEXT: Book brings new information to arguments against capital punishment