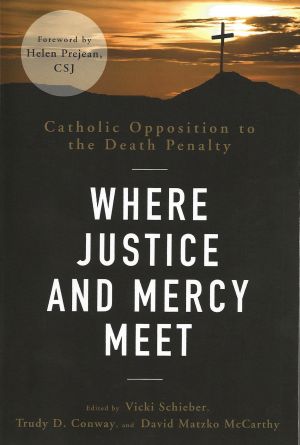 In the foreword to “Where Justice and Mercy Meet,” Sister Helen Prejean, the Sister of St. Joseph of Carondelet famous for “Dead Man Walking,” promises that readers will learn new information in every chapter.

She is not exaggerating; every chapter drives home with documented data the need to abolish the death penalty once and for all in the United States. The text examines the death penalty from every conceivable angle, presenting arguments from history, sociology, Supreme Court decisions, economics, Scripture, church teachings, international thought and stories. The information is profoundly impressive and should convince even the most ardent supporters of the death penalty to change their position.

The intellectual arguments against capital punishment are laid out clearly and logically; it would be difficult, if not impossible, to argue against them.

Even former Supreme Court justices such as Harry Blackmun, William Brennan, Lewis F. Powell Jr. and John Paul Stevens came to recognize, despite their previous opinions, that the death penalty should be abolished. While court decisions have in the past contended that the penalty is legitimate if applied in a just and reliable manner, the justices realized that such application has failed and is, in fact, impossible.

An often-cited intellectual argument is cost, with proponents of the penalty saying that it is less costly to execute someone than to keep him/her in prison for life. These people, however, are mistaken. Because death penalty trials last longer and require wide-ranging expert testimony, appeals and specialized death row security, execution does not cost less than a life term.

New Jersey abolished the death penalty after recognizing that the state had spent $250 billion in 25 years to maintain the death penalty despite the fact that no one had been executed in the state in more than 40 years. New Jersey decided it would be more prudent to spend that money on crime prevention and victim support.

The United States has capital punishment not for cost effectiveness but for retribution. At some level, we all know this. It is the desire for payback that keeps us toward the top of the list for executions, following only China, Iran, North Korea and Yemen in 2010. Seventy-eight percent of all nations, and all of the Western countries (except the United States), have done away with capital punishment.

Rarely, however, are intellectual arguments used when people debate capital punishment. Inevitably, the worn question that quickly surfaces in a debate is: “What if it were your mother/sister/child who was assaulted and murdered?” Journalist Antoinette Bosco recalls having responded to that question in a graduate-level ethics class: “I’d say kill the *******.” Some years later, when her son and daughter-in-law were murdered, she did want to kill the killer. It was not long, though, before she began seeking a way to forgive.

While all the arguments are germane, for the Christian there is one question that trumps all others and must be the basis for our pro-life stand: Can the dignity ascribed by God to the human person be forfeited? That is, can a person’s behavior ever lower him or her from the status of human to subhuman beast, deserving of consideration not as a person but as a monster or beast?

For the Christian, there is only one answer to that one question: no. And that answer precludes our approval of the death penalty. However monstrous or deranged the behavior of the accused, he or she is still stamped with the indelible image of God.

The chapters do not need to be read in order, but they do need to be read. This book is critical as disciples try to form our consciences according to Catholic social teaching, which demands, according to Scripture, that we love our enemies, pray for those who persecute us and forgive as we are forgiven.

Miller taught at Mount St. Mary Academy in Little Rock, Ark., for 31 years and moved to Illinois upon retiring. She holds a bachelor’s degree in theology from St. Gregory University in Shawnee, Okla.

PREVIOUS: Parents may have some explaining to do with ‘Percy Jackson: Sea of Monsters’