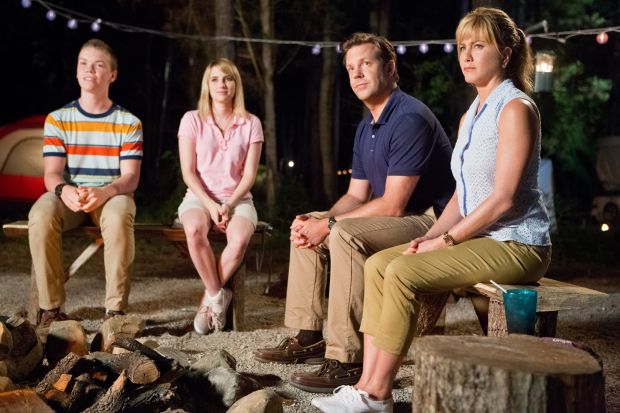 Will Poullter, Emma Roberts, Jason Sudeikis and Jennifer Aniston star in a scene from the movie "We're the Millers." (CNS photo/Warner Bros.)

NEW YORK (CNS) — “We’re the Millers” (Warner Bros.) would like to be taken as both a conversion story and a comedy celebrating family togetherness — albeit through the exploits of an improvised clan of quirky misfits. In reality, however, director Rawson Marshall Thurber’s tawdry project falls short on both scores.

Instead, it comes across as a smirking satire aimed at self-perceived hipsters who presumably share its script’s dripping disdain for squares, religion and respectability.

Still, moviegoers may imagine that things are headed in a more conventional direction when first presented with a central character as ripe for a change of heart as Denver drug dealer David Clark (Jason Sudeikis). A college chum he crosses paths with may express envy of David’s unburdened lifestyle — single, childless, still making money peddling pot, just as he did back at their alma mater — but we know different. Or so, at least, it seems.

Two of David’s neighbors, down-on-her luck stripper Rose (Jennifer Aniston) and naive latchkey kid Kenny (Will Poulter), also appear to be in need of some improved circumstances. So, too, does another of David’s acquaintances, streetwise teen runaway Casey (Emma Roberts).

Their shared opportunity arrives disguised as misfortune: When well-meaning Kenny inadvertently gets David robbed of both his stock-in-trade and his cash, David’s ruthless supplier Brad (Ed Helms) demands that David turn mule and transport a cargo of marijuana from Mexico to the Mile High City to clear the debt.

Fearful that his lone-wolf persona will incur suspicion, David decides that he and Rose will pretend to be husband and wife on the trip. Together with supposed siblings Kenny and Casey, they’ll pose as the Millers — a family of clueless tourists who’ve climbed aboard their mobile home in search of some good old gosh-darn fun south of the border.

And, in fact, as they struggle to overcome various complications — including their run-in with DEA agent Don Fitzgerald (Nick Offerman) who’s vacationing with his wife, Edie (Kathryn Harris), and daughter Melissa (Molly Quinn) — the quartet do begin to take on the characteristics, both positive and negative, of a real clan.

Sparks fly, of course, both between the forever bickering David and Rose and between conveniently same-aged Kenny and Melissa. And David begins to show some mentoring skills toward Kenny as well as appropriate concern over Casey’s poor taste in men.

Yet, even when they culminate in a moment of genuine altruism on David’s part, such half-hearted motions in the direction of moral advancement seem all too unconvincing. That’s primarily because they go unmatched by any recognition that narcotics are not the basis for a career.

In fact, the very last shot of the movie serves to reinforce its consistent message that low-level trafficking in pot is a harmless way to make a living.

Other rankling indications of this picture’s real stance include a scene where Rose tries to maintain the bourgeois facade by gathering everyone together for a hand-holding session of saccharine prayer. Everyone knows only self-righteous hypocrites do that kind of thing.

As for the script’s later efforts to harvest laughs from scenarios involving both aberrant sexual behavior and the mistaken perception of it, they’re so predictable as to stir only par-for-the-course disgust.

In sum, this smug offering, which portrays ordinary people as a pack of saps, might better be called “We’re the Millers — And You’re Not.”

The film contains skewed moral values, strong sexual content — including a same-sex encounter, voyeurism and full nudity — a benign view of drug use, much tasteless humor, including a scene mocking prayer, about a dozen uses of profanity and pervasive rough and crude language. The Catholic News Service classification is O — morally offensive. The Motion Picture Association of America rating is R — restricted. Under 17 requires accompanying parent or adult guardian.