Authors brings to life stories of those who resisted the Nazis 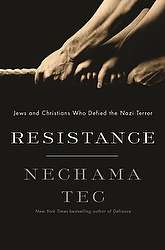 Nechama Tec’s work has centered on the Holocaust, analyzing not only the tragic events of the Nazi genocide of the Jews but also rescuers and survivors.

In her latest work, “Resistance,” she brings a lifetime of scholarly study to bear on the stories of those who resisted, some directly by taking up arms, some no less significantly by saving others, or risking their lives to tell a seemingly indifferent world about the horrors even as they were taking place.

The book tells story after vivid story. While there are copious footnotes for scholars, the average reader will be transfixed by the stories of real people, Jews and Christians, caught in a nightmare yet finding goodness, courage and hope in themselves and in others. Many of the narratives are based upon personal interviews, so we hear their stories in their own words.

The goal was not necessarily to defeat the Nazis but more realistically and to make the Germans pay at least in small part for the carnage they were wreaking. The book tells the story of the ghetto fighters of Warsaw, and of the later, equally unsuccessful Polish uprising. It describes how many fled into the forests to establish small bands of resisters, striking the Nazis and saving lives where they could. It describes uprisings in concentration camps where the victims strove to take at least some control over their fate.

Tec tells the stories of the many women who served as couriers, bringing arms and news to the fighters and making significant contributions to the resistance that men could not have made.

She narrates the story of Zegota, the Polish Catholic group dedicated to saving lives, especially the lives of their Jewish fellow citizens. Zegota was a light that shone in the darkness and will give readers a sense of the greatness of which humanity was capable even in the most dire of times. The Nazis in Poland especially went after the educated among Catholic Poles, seeking to destroy anyone who could become a leader of the resistance.

Tec describes as well the situation in Eastern Poland and Byelorussia, where the Soviets linked with socialists to fight the German invaders. She notes the high level of anti-Semitism among the Russians, and to a lesser extent in Poland.

Tec concludes with a chapter on Jan Karski, a Polish Catholic who served the Polish underground, was smuggled into a ghetto and a concentration camp and smuggled out to tell the true story of the death camps. Karski met with Churchill and Roosevelt, among other Western leaders, but was unable to convince them to help the Jews.

I met Karski and worked with him in his later years when he was a professor at Georgetown University. He was a great man in my opinion, as in Tec’s, and well deserves the praise she gives him and through him the other rescuers who tried to save others and, in a sense, humanity itself.

Fisher is professor of Catholic-Jewish studies at St. Leo University in Florida.