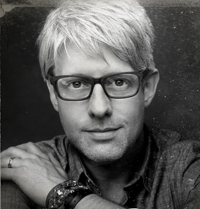 If, as St. Augustine said, singing is praying twice, then prayers lifted the rafters of the parish center at St. Norbert Parish in Paoli as two-time Grammy Award nominee Matt Maher performed a live concert for more than 600 fans on Aug. 30.

Maher is a Catholic composer and musician whose music continues to cross theological boundaries and is one of the most requested and played artists on contemporary Christian radio stations. Among his most notable concerts this year were at the Passion 2013 conference at the Georgia Dome, attended by more than 60,000 college students, and the Eucharistic Adoration vigil at World Youth Day 2013 on Copacabana Beach in Rio de Janeiro, Brazil, attended by approximately 3 million people and Pope Francis.

Three weeks prior, the concert started with what seemed to be a crazy notion. St. Norbert parishioners David and Martha Wilbur noticed that Maher was scheduled to sing a couple concerts in the local area and wondered about the possibility of him singing at St. Norbert. They are big fans of his and thought that a concert by him would be an inspiring way to praise the Lord and bring people closer to God.

Many fellow parishioners said that Maher was “way beyond our reach.” Still, they were willing to donate whatever it took to have the parish experience his music.

“It was kind of a whirlwind that somehow came together in just three weeks,” said Mark Griswold, who is the director of youth ministry at the parish. “Initially, I just laughed, but as it became more and more real, we had to run it past our pastor, who, after being filled in with the details said, ‘Let’s make it happen!’”

Griswold and the Wilburs family reached out to Maher’s staff and were able to secure a concert for Aug. 30.

“So many parish members volunteered their talents and stewardship in order to make the concert a moving experience for everyone,” said Norbertine Father Michael J. Lee, pastor of St. Norbert Parish.

And thanks to parishioners’ generosity, tickets were free to the more than 600 attendees.

“If just one person can be reached, and change their life for all eternity tonight, it is worth it,” said David Wilbur.

He and his wife Martha moved to Pennsylvania three years ago from Orlando, Fla. They searched for a parish where they and their three sons Joseph, Jonathan and John would feel welcome and inspired.

“We were guided to St. Norbert when a woman (who was not a member) handed us a flyer, and when we attended Mass here, we truly felt the Holy Spirit in this parish,” said Martha.

David called the parish “very warm and welcoming,” and added that if not for the parish community, “we might have considered returning to Orlando.”

Matt Maher was born in Newfoundland, Canada and now resides in Nashville, Tenn., with his family. He went through a period of crisis in his early 20s, and out of a dissatisfaction with life, stopped practicing his Catholic faith for a period.

“There is an intimacy in the sacramental life of the Church that many Catholics aren’t even aware of, and I lost touch with it myself,” Maher said in an interview before the concert. “In my concerts, my ultimate goal is to provide a ‘touch point’ in people’s journey of faith to have an encounter with the living God.”

Some of his popular songs include “Your Grace Is Enough,” “Christ Is Risen,” “Turn Around,” “Great Things” (based on the Magnificat) and “Lord, I Need You,” which he sang at the eucharistic vigil at World Youth Day. (See the video below.)

“For someone to rediscover a personal relationship with Christ … how much more personal can you get?” Maher said.

His latest album is titled “All The People Said Amen.”

Amanda Finkelston is a freshman at Millersville University and a member of the youth group at St. Norbert Parish (called Norb’s Youth Ministry). She and a friend “found the concert spiritually lifting, and we use many of his songs in our youth Mass.”

Aspiring guitarist Matthew VantSoot, an 11th grade student from Pittstown, N.J., was also moved during the performance. “It was an amazing feeling of unity and I could feel the Holy Spirit with us,” he said.

Pulling the concert together seemed like a midsummer’s dream three weeks earlier but became reality thanks to the contributions of a faith community.

“To see so many of this age group excited for the Lord is just awesome!” said the pastor of that community, Father Lee.