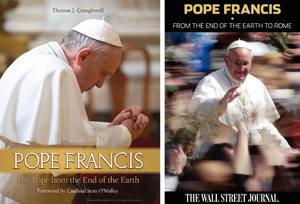 One has no difficulty imagining the frantic flurry of activity in the offices of publishers following the appearance, on March 13 of Pope Francis as the new leader of the world’s more than 1.2 billion Catholics. A quick online search indicates that more than 400 books about Pope Francis have appeared in print, in English alone, since his election. There doesn’t yet, however, seem to be a thorough biography of Pope Francis.

“Pope Francis in His Own Words,” edited by Julie Schwietert Collazo and Lisa Rogak, gives us a quick-reference collection of quotations from the new pope organized by topic, e.g. “On Age and Aging,” “On Assisted Suicide,” “On Beauty,” “On Atheists.” Some of the topics may catch the reader by surprise,” e.g., “On Bridezilla Weddings,” about which the future pope said: “In some churches — and I don’t know how to remedy this, honestly — there is a fierce competition between bridesmaids and brides. These women aren’t observing a religious act; they’re just showing off. And this weighs heavily on my conscience.”

Among these five books, “Pope Francis,” by Matthew Bunson, is a journalist’s and church historian’s detailed discussion of events surrounding the new pope’s election, from the resignation of his predecessor, Pope Benedict XVI, to the installation of the former Cardinal Jose Mario Bergoglio, of Argentina, as the first Pope Francis. You also get 16 pages of color photos.

Bunson: “Like Francis of Assisi, Pope Francis wants the church to be poor in spirit, to be humble and Christlike.”

Thomas Craughwell’s “Pope Francis: The Pope from the End of the Earth” comes closest to being an actual biography of Pope Francis, albeit a sketchy one. The only hardback book of the five, Craughwell’s is admirably well-researched and readable to the point of being an entertaining and informative page-turner. You also get dozens of photos.

“Pope Francis,” Craughwell notes, “has something significant in common with the saint of Assisi whose name he took — he is not comfortable with pomp.”

The sole book among these five that seems to be available only as an e-book, “Pope Francis: From the End of the Earth to Rome,” is journalistic in style — not surprising given that it was written by scribes from The Wall Street Journal — but more in-depth than you would get from typical newspaper articles. This is a remarkably thorough look at the new pope’s personal history, his years as a Jesuit priest in Argentina, and the years, months, weeks and hours that led up to his election as Pope Francis.

The Wall Street Journal’s book concludes with an account of the visit of Pope Francis to the tomb of St. Peter, deep in the earth below the main altar in St. Peter’s Basilica: “Peter wasn’t a monarch, but a martyr who had been crucified upside down for his beliefs. There was no pomp or regalia, not even a tombstone. Just a message etched into a wall in ancient Greek: ‘Peter is here.’ Pope Francis entered. … closed his eyes, and prayed.”

“A Call to Serve,” by Stefan von Kempis and Philip F. Lawler, also covers events leading to the appearance of Pope Francis before the crowds in St. Peter’s Square, and it describes the surprising and refreshingly humble style of the new pope that became evident in the first weeks following his installation. Again, this book provides numerous photos. A note in the front of the book declares that its text was finalized on April 3, 2013, less than a month after the election of Pope Francis, so this was one expeditious publishing project.

Authors von Kempis and Lawler conclude their book with what may strike the readers as a startling prediction: “The first non-European pope in 1,200 years may have the perspective needed to spur Europe’s recovery of the Catholic faith today.”

All five of these books, each in its unique way, is informative and inspiring. This reviewer’s advice: If you can, read them all.

Finley is the author of more than 30 books on topics of interest to Catholic readers, including a bestseller, “The Rosary Handbook: A Guide for Newcomers, Old-Timers, and Those In Between” (The Word Among Us Press). To learn more, visit www.mitchandkathyfinley.com.

PREVIOUS: In ‘The Grandmaster,’ everybody’s kung fu fighting, with honor

NEXT: Movie review: The Spectacular Now