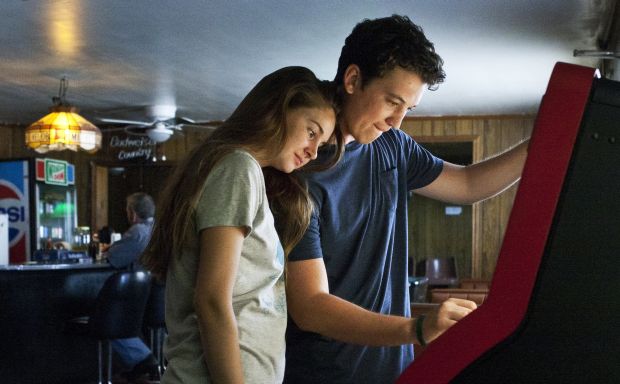 Shailene Woodley and Miles Teller star in a scene from the movie "The Spectacular Now." (CNS photo/A24 Films)

NEW YORK (CNS) — “Teen Alcoholics in Love” would be a more accurate title for “The Spectacular Now” (A24), a coming-of-age saga that paints a disturbing picture of high-school life in small-town America.

Based on the novel by Tim Tharp and directed by James Ponsoldt (who tackled another drinking theme in 2012’s “Smashed”), the film — a familiar story of good girl meets popular but flawed guy — takes an indifferent stance toward a multitude of sins as it charts the romance between these attracted opposites.

Over the course of much angst, the audience wonders whether she will redeem him before he has the chance to corrupt her. High school has never seemed so complicated.

Sutter (Miles Teller) is the most popular senior in school, with not a care in the world. He prefers to live — and party — in the moment (the “now” which he finds “spectacular”), rather than accept any responsibility or plan for his future, let alone graduate. His fecklessness repels his longtime girlfriend Cassidy (Brie Larson), who has the good sense to want more out of life.

Sutter is also an alcoholic, forever sipping from a cup of “soda” fortified with booze from his hip flask, drifting through each day in a drunken fog. Worse still, everyone around him seems to be aware of his problem, but excuses his addiction because of his sunny personality.

After an all-night bender, Sutter is found, unconscious, on a stranger’s front lawn by Aimee (Shailene Woodley), who thinks he’s dead. Prince Charming awakens, however, and Aimee is besotted. Aimee has never had a boyfriend, yet the Big Man on Campus has just landed in her lap.

Aimee, a dreamer who longs for companionship, ignores all the red-flag signals that should tell her to flee. Sutter leads her on but is also intrigued by her goodness.

Both of them come from troubled backgrounds, but Aimee works to support her widowed mom, while Sutter is consistently enabled by his mother, divorced nurse Sara (Jennifer Jason Leigh).

Over tutoring sessions and rolls in the hay, Aimee plans their future together, while Sutter buys her a flask. Fortunately, Aimee keeps her wits (if not her sobriety), and gently encourages Sutter to mend his selfish ways.

First, Sutter must confront the past, and his absent father (Kyle Chandler). Sara has done everything in her power to prevent contact, and for good reason. For Dad is revealed to be a grown-up version of his son, a drunk and drifter, life of the local bar and not interested in anyone but himself.

This should be an epiphany for Sutter, but “The Spectacular Now” has more drama in store, including an ambiguous ending. The movie inhabits an irritating judgment-free zone, which works only so long Aimee is sober and able to keep a grip on the moral compass.