A mystery novel of love, isolation and belief gone wrong 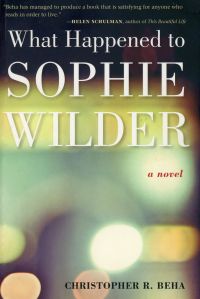 This is the cover of “What Happened to Sophie Wilder” by Christopher R. Beha.

It is a mystery, a love story and a conversion narrative.

Beha probably would question being placed in the company of “Catholic novelists,” because, as he told interviewer Terry Gross on the NPR program “Fresh Air,” he is “someone who was raised Catholic and was indeed a believing Catholic, not just a cultural Catholic by upbringing, who then lost his faith.”

Although he says he has lost his faith, he also says, “In lots of ways, faith became much more interesting to me once I didn’t have it.”

An associate editor at Harper’s magazine, Beha brings his thoughtful consideration of faith to the pages of that magazine where he writes with respect about the questions of belief and unbelief.

With this novel, Beha says, he was “interested in writing about a person of faith, while also writing about the attempt of someone who does not have that capacity for faith to try to understand it.”

“What Happened to Sophie Wilder” tells the story of what happened to two young adults — intense friends in college who reconnect in their late 20s.

Is any decade of life more eventful than ages 18 to 28? It is the age of first independence and self-definition. Experiences and decisions come thick and fast: What to learn? Where to live? What work to do? Who to love? What to believe?

First-person narrator Charlie Blakeman is 28 and sharing a townhouse in Manhattan with his cousin Max, and other literary types, while he tries to figure out what to do next before his book advance runs out. He says: “In truth we were quickly reaching — had likely enough already reached — the age where it no longer made sense to talk about ‘promise.’ It was around this time that I remarked to Max that no matter what we now achieved no one would say, ‘He’s so young.’ Precocity had passed us by. ‘After 28,’ I said sadly, ‘you’re judged on your merits.’

Charlie’s most significant friend from his college years, Sophie Wilder, appears at his house one evening and stays for a few days. The encounter, and its aftermath, prompt Charlie to look back over the years when the two were close and to piece together what happened in between.

At 18, both Charlie and Sophie are only children with no family guidance. Charlie’s father is recently deceased, his mother withdrawn into drinking and grief. Sophie’s parents have died in a car crash, leaving her with a house, an income and a world of choices.

First, they choose to be writers. They read and write intensely together. After a betrayal separates them, Sophie embraces a fervid Catholicism. She finds guiding principles, but applies them in isolation, even as she marries and embarks on a career. Following her own demanding judgment, she acts on her understanding of these principles in noble, harsh and ultimately tragic ways.

“What Happened to Sophie Wilder” is a great read. It prompts questions that call for rereading. Is Sophie a cold-hearted manipulator, an idealist, a seeker, all of these? Charlie wants to understand what happened. So will you.

PREVIOUS: Advice for ‘The Counselor’: Avert your eyes

NEXT: Too much of anything can be bad, including screen time