Too much of anything can be bad, including screen time

WASHINGTON (CNS) — Parents, you wouldn’t let your kids gorge every meal at an all-you-can buffet, would you? Grandparents have the reputation of spoiling their grandchildren, but they wouldn’t let the grandkids spend all day, every day at the beach while letting their skin burn to a crisp, would they?

Just like overexposure to food and to the sun — and U.S. society is already grappling with the ramifications of those two phenomena — the same is true with screen time, no matter where it’s found: TV, computers, video games, and even tablets and smartphones.

The American Academy of Pediatrics issued a new policy statement Oct. 28 on the dangers of too much screen time for children. It replaces its prior statement, formulated in 2001, when tablets didn’t even exist, and smartphones weren’t nearly as smart as they are now.

Media by itself is not the leading cause of any health problem in the United States, according to the pediatricians’ group, but it can contribute to numerous health risks. Those include obesity, lack of sleep, school problems, aggression and other behavior issues.

“A healthy approach to children’s media use should both minimize potential health risks and foster appropriate and positive media use — in other words, it should promote a healthy ‘media diet’,” said a statement by Dr. Marjorie Hogan, co-author of the new policy.

“For nearly three decades, the AAP has expressed concerns about the amount of time that children and teenagers spend with media, and about some of the content they are viewing,” said the other co-author, Dr. Victor Strasburger. “The digital age has only made these issues more pressing.”

The pediatricians’ organization has three tasks for parents. 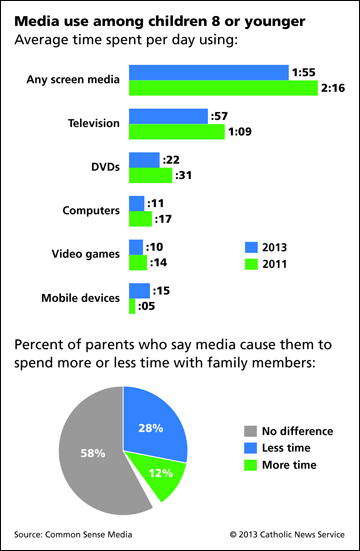 First, they can model effective “media diets” to help their children learn to be selective and healthy in what they consume. Parents can take an active role in children’s media education by viewing programs with them and discussing values.

Second, parents can make a media-use plan, including mealtime and bedtime curfews for media devices. Screens should be kept out of kids’ bedrooms.

Parents also can limit entertainment screen time to less than one or two hours per day; for children under age 2, they should discourage exposure to screen media.

There’s plenty of independent justification for the new policy. Common Sense Media, in a report issued this fall, “Zero to Eight: Children’s Media Use in America 2013,” did its best to remain neutral on its findings, but the numbers will raise eyebrows, and maybe some hackles.

Common Sense Media did a similar report two years ago, and plans to issue updates every other year. Based in San Francisco, the nonprofit organization advocates on child and family issues, and regularly studies media and technology’s effects on young users.

The one major bit of good news in the latest study was that total screen time actually decreased, from 2:16 a day to 1:55 a day, a shrinkage of 21 minutes. And more children are using mobile devices to read, although reading still finishes last among the uses cited in a survey of families by Common Sense.

Even so, the upswing in use of mobile media devices by kids no older than 8 is nothing short of astonishing.

The use of tablets by children has increased to five times what it had been in 2011, from 8 percent to 40 percent. The use of smartphones also has soared. Two years ago, the figure was 52 percent of young children; now, it’s 75 percent. The amount of time spent on these kinds of devices has tripled over 2011 figures.

So why do kids have TVs in their bedrooms? The top two reasons, according to Common Sense: it frees up other TVs so family members can watch what they want, and it “occupies the child so (the) parent can do other things.”

Surely, we can do better than this.