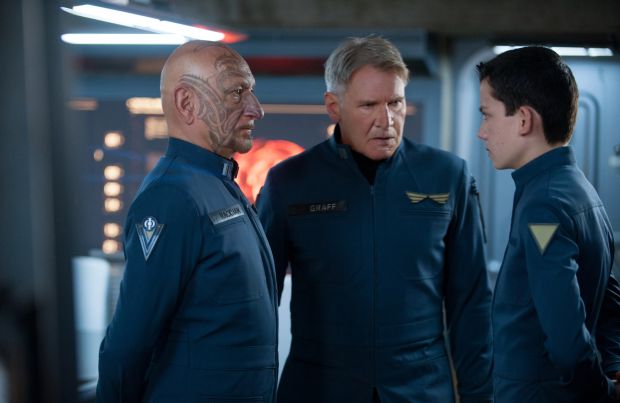 NEW YORK (CNS) — On its surface, “Ender’s Game” (Summit) appears to be another futuristic science-fiction movie in which the fate of humanity hinges on the outcome of an epic battle waged in space. Countless aircraft will be obliterated and the hero will overcome significant adversity in order to vanquish a pernicious alien enemy.

Not so fast. Those unfamiliar with the source material, Orson Scott Card’s 1985 book of the same name, will be surprised to discover a film appreciably more thoughtful and daring. Admirers of the book will likely emerge pleased, even if the adaptation doesn’t live up to all their expectations.

Thematically, what elevates “Ender’s Game” is that it offers a searching look at the morality of war and the unthinking manner in which it is often waged. It targets our more bellicose instincts, specifically, the tendency to strike first and ask questions later.

The story rests on the premise, prescient in 1985, that warfare in the near future will be so altered by technology that children will be better equipped to conduct it than adults. As one character says, “Young people integrate complex data better than adults.” In other words, all that time spent playing video games, using computers and staring at the LED screens on electronic devices is ideal preparation for military action.

But there’s more to becoming an effective fighter than digital dexterity and comfort in the virtual realm; other skills and sensitivities are required. Because he possesses these elusive qualities, 12-year-old Ender Wiggin (Asa Butterfield) is chosen to lead the Earth’s military, the International Fleet, against an alien species called Formics. Fifty years earlier, the Formics tried to colonize the planet and were repelled thanks to the exploits of legendary pilot Mazer Rackham (Ben Kingsley).

Since that war, in which tens of millions perished, mankind has been assiduously preparing for a second invasion attempt. Col. Hyrum Graff (Harrison Ford), who oversees recruitment and training for the military, brings Ender to Battle School, located in a facility orbiting Earth, where trainees study and carry out mock team exercises. Ender excels and is promoted to Command School, where Rackham becomes his mentor. There, Ender and other elite fighters conduct an exhaustive battery of simulations in preparation for a showdown with the Formics.

Impressively limned by Butterfield, Ender is able to combine empathy and tactical killer instinct. His ability to understand what his opponent is thinking gives rise to his strategic brilliance, but he’s troubled by the ruthlessness his compassion enables.

Director and screenwriter Gavin Hood faced a major challenge having to condense the complicated story for the screen. He focuses on Ender’s maturation and interaction with his peers during their training and the story seems overweighted toward the buildup to the climactic battle. The visual effects, while not mind-blowing, are admirably clear and often elegant; the filmmakers should be applauded for not resorting to Imax or 3-D formats.

A key to the movie’s success is that, unlike many of this ilk, it doesn’t undercut its salubrious message by trying to have it both ways — by endorsing what it also cautions against. The anti-war motif is the end game, so to speak.

One plot feature concerning population control and a limit on the number of children families are permitted will trouble Catholic viewers. As for other objectionable elements, because warfare is conducted remotely and largely by drones, there’s nothing problematic in that context. Skirmishes between the young trainees are hard-hitting yet not excessive or graphic.

The film contains a number of scenes with fighting and bullying behavior among teenagers, several classroom slurs, some scary imagery, some mild innuendo, and one use of crass language. The Catholic News Service classification is A-II — adults and adolescents. The Motion Picture Association of America rating is PG-13 — parents strongly cautioned. Some material may be inappropriate for children under 13.

NEXT: New Christmas/Advent movie arrives in time for the holidays