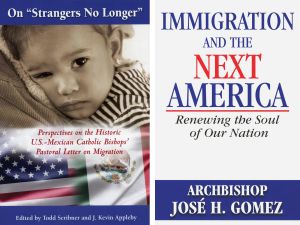 The covers of “On ‘Strangers No Longer’: Perspectives on the Historic U.S.-Mexican Catholic Bishops’ Pastoral Letter on Migration,” edited by Todd Scribner and J. Kevin Appleby and “Immigration and the Next America” by Archbishop Jose H. Gomez. (CNS)

In 2003 the U.S. and Mexican bishops issued a forward-looking joint pastoral letter asking for sweeping changes in immigration policies on both sides of the border. Ten years later the document is even more forward-looking. Rather than major reforms being enacted, the situation has deteriorated in both countries.

The pastoral letter is called “Strangers No Longer: Together on the Journey of Hope.” Today it offers vital background for understanding a Catholic perspective on immigration, especially now that a dysfunctional U.S. Congress is considering sweeping immigration reform legislation.

The collection titled “On ‘Strangers No Longer'” and Archbishop Jose H. Gomez’s new book, “Immigration and the Next America,” update the situation and provide a current Catholic framework for the immigration debate. Both support the controversial call in the pastoral letter for U.S. reform measures that would legalize the 11 million immigrants residing in the United States without permission.

Both are a stark reminder to Catholics of the deep moral dimensions of this issue, especially regarding the human and civil rights of migrants who travel across borders legally or illegally to improve their lives. They also emphatically recall the U.S. church’s long history of protecting immigrant rights.

In a United States now composed mostly of descendants of immigrants, these books recall that the waves of Catholic immigrants from Europe starting in the 19th century were the brunt of anti-immigrant, nativist prejudices, even though they arrived legally. The argument was that their languages, customs and religion — with its allegiance to the pope — would subvert U.S. culture and undermine its political system, rooted in Anglo-Saxon Protestantism. The nativist arguments today against legalization and widening the legal doors to immigration by the heavily Catholic Mexicans and Central Americans are mostly the same. The anti-Catholicism, though, has receded as Catholicism has moved into the mainstream along with pasta, St. Patrick’s Day and polkas.

The book edited by Todd Scribner and J. Kevin Appleby, both immigration officials of the U.S. Conference of Catholic Bishops, was inspired by the pastoral letter. It is a collection of 12 essays by U.S. and Mexican experts on immigration issues in both countries. They provide theological, political, sociological, historical and economic analysis of today’s situation and what is pulling and pushing migration to the United States.

Catholic readers of these essays also may be surprised at how historically deep and extensive U.S. church services to immigrants have been. Not only has the church adapted parish programs to provide spiritual and pastoral services to newly arrived Catholics, it has also developed extensive social service networks. Those served include non-Catholics and go beyond traditional immigrants to cover refugees and victims of human trafficking. The major flaw of the book is its lack of detailed treatment on how drug trafficking into the United States and arms smuggling into Mexico have clouded and distorted the immigration debate.

The book by Archbishop Gomez of Los Angeles is a pastoral reflection. The Mexican-born archbishop, a naturalized U.S. citizen, sees the current immigration debate as a moral crossroads for the entire U.S. population. He envisions the debate as a test of whether U.S. society will restore its soul by returning to the God-centered, natural-law roots of the Declaration of Independence and Constitution. Humane immigration laws need, he advocates, to stem from the universal rights established by God.

Archbishop Gomez notes that Anglo-Saxon Protestantism is not the exclusive moral cornerstone of U.S. society as many parts of what are now the United States developed from a Hispanic-Catholic culture which predates British colonialism. While Spanish colonialism produced many abuses, the archbishop recalls that many missionaries defended the human dignity and rights of Indians based on the moral precept that they, too, were formed in the image of God.

In the words of a fast-food taco chain, these books are asking people to think outside the bun.

PREVIOUS: Too much of anything can be bad, including screen time

NEXT: Movie review: About Time