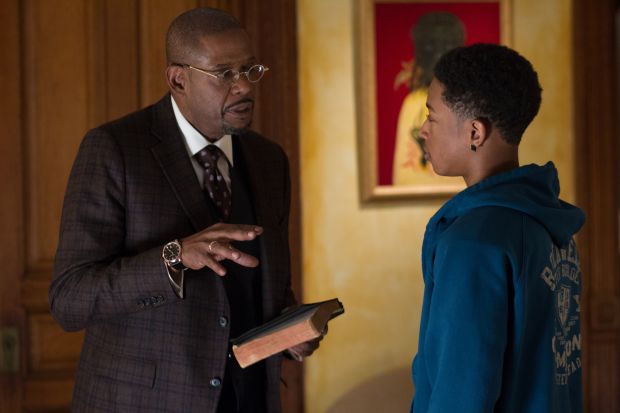 Forest Whitaker and Jacob Latimore star in a scene from the movie "Black Nativity." (CNS photo/Fox)

NEW YORK (CNS) — If you’re tempted to bewail the absence of Christ from Christmas these days, you’ll find the Lord right where he belongs — front and center, receiving praise and worship — in the rousing musical drama “Black Nativity” (Fox Searchlight).

In fact, redemption-centered Christian faith pervades the picture to a degree rarely seen in a mainstream movie.

That’s just as well, since the urban setting of this adaptation — and updating — of poet Langston Hughes’ 1961 song-play surrounds its characters with a host of ills from which to be saved. A case in point: the poverty besetting Baltimore single mother Naima Cobb (Jennifer Hudson).

Facing eviction from the home she shares with her good-hearted but naive son, Langston (Jacob Latimore) — named for the author, of course — Naima sends Langston to New York to live with her estranged parents: stern Harlem minister Cornell (Forest Whitaker) and his more sympathetic wife, Aretha (Angela Bassett). Naima hopes the arrangement will only be temporary.

Miserable in his new surroundings, Langston pines for his mom and chafes under the exacting standards of respectability enforced by his grandfather. He’s also plagued by misadventures, one of which lands him in jail for a time.

Tempted to solve Naima’s financial woes by stealing enough loot to get her back on her feet, misguided Langston seems headed for the life of a petty criminal. But the annual holiday pageant Cornell’s church puts on — during which Langston has a vision of the first Christmas — helps him to see the light.

So too does the unexpected intervention of a concerned acquaintance (Tyrese Gibson), a man Langston first encountered during his brief incarceration.

Soulful musical performances, unabashed piety and resoundingly positive values go a long way to smoothing over the rough patches in screenwriter and director Kasi Lemmons’ screen parable. Though not a movie for small children, this heartfelt salute to forgiveness, family unity and the power of religious belief will likely delight most others.

The film contains mature themes and the occasional threat of violence. The Catholic News Service classification is A-II — adults and adolescents. The Motion Picture Association of America rating is PG — parental guidance suggested. Some material may not be suitable for children.

NEXT: Animated fun of ‘Frozen’ can warm anyone’s heart