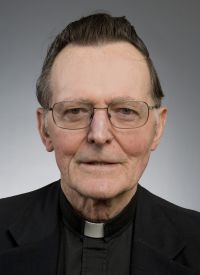 WASHINGTON (CNS) — At 82, Msgr. Leonard Hurley still has a distinctive speaking style and ad-libs easily, qualities that served him well 50 years ago when he narrated President John F. Kennedy’s funeral Mass at the Cathedral of St. Matthew the Apostle in Washington for a worldwide TV and radio audience.

For the past 18 years, the veteran priest who served as assistant pastor and pastor at several local parishes has been the chaplain at the Carroll Manor Nursing Home in Washington and rector of the adjoining O’Boyle Residence for retired priests of the archdiocese.

On Nov. 25, 1963, then-Father Hurley was situated in the cathedral’s basement, right beneath the altar, narrating the funeral Mass as he watched a bank of TV monitors and was surrounded by about a dozen TV and radio technicians.

In a 1997 interview, the priest said, “The whole ceremony was charged with emotion, but I kept mine under control.” He added that he was, nonetheless, “feeling every minute of it. I’m not afraid of feeling, never was. If you don’t feel what you’re saying or singing, it’s no good.”

In a recent interview with the Catholic Standard, Washington’s archdiocesan, Msgr. Hurley said he admired the professionalism of the TV and radio workers who joined him in the cathedral basement that day. “They were shook (up) like everybody else… doing the best they can do, doing what they were there to do.”

Three days before the Mass, on Nov. 22, 1963, the young priest was teaching a religion class at Sts. Paul and Augustine School in Washington, where he was an assistant pastor, when he heard that Kennedy had been assassinated. “Most of us had the same reaction — I don’t believe it!” he remembered.

As a young priest, the Massachusetts native had been asked to do televised prayers for the end and beginning of local stations’ broadcast days. His strong speaking style led him to direct the Archdiocese of Washington’s radio and television efforts from 1963 to 1976. During that time, he hosted local talk shows about religion on Sunday mornings and was the longtime presider of the TV Mass for shut-ins. Over the years, he also narrated the Christmas midnight Mass from the Basilica of the National Shrine of the Immaculate Conception in Washington. 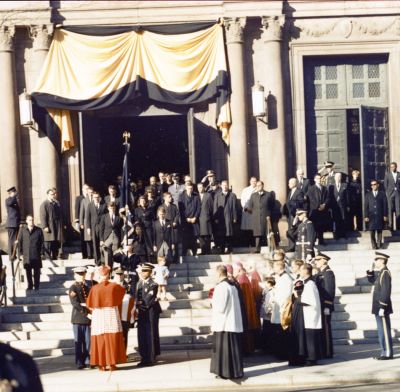 After Kennedy’s assassination, Father Hurley was called to St. Matthew’s Cathedral, and assigned the job of narrating the funeral Mass. He said he greatly admired then-Archbishop Patrick O’Boyle of Washington, and he told the archbishop that they needed to “go with the pros” — find out what the TV and radio professionals needed — and provide that for the Mass.

Although the Mass would be in Latin, his commentary had to be prepared in English, so the audience would understand it. Ironically, days later, English-language Masses would begin on the first Sunday of Advent in the Archdiocese of Washington and across the United States, as Mass in the vernacular was one of the reforms resulting from the Second Vatican Council, which was then underway.

To prepare for narrating the funeral Mass, the priest was up about 32 hours straight, preparing a script on about 50 legal-sized pages, working hard to make the Mass understandable for the audience watching or listening to the simulcast TV and radio production.

“I was there to do a job … I had done play-by-play descriptions of many church ceremonies,” he said.

But the priest also knew when to stop talking and let the picture tell the story.

After the Mass, when young John Kennedy Jr. saluted his father’s flag-draped casket outside the cathedral, the priest stopped his narration, so the audience could just watch the dramatic scene, in silence.

Mark Zimmermann is editor of the Catholic Standard archdiocesan newspaper in Washington.