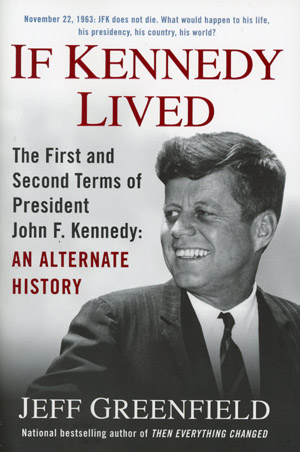 This is the cover of “If Kennedy Lived: The First and Second Terms of President John F. Kennedy: An Alternate History” by Jeff Greenfield. The book is reviewed by Eugene J. Fisher. (CNS)

When I worked for the U.S. Conference of Catholic Bishops, I got to know Sargent Shriver rather well, and through him I met a number of members of the extended Kennedy clan. I came away from these experiences with a great admiration for how their Catholic faith and values imbued their political vision and aspirations for our country. Jeff Greenfield’s “If Kennedy Lived,” a fascinating exercise in a historical “what if,” was thus a very personal exercise for me as a reader, and one I would recommend to anyone who wishes to understand better one of the most tumultuous and meaningful periods in American history since the Civil War.

Greenfield is a journalist who has won five Emmy Awards. He was an aide and speechwriter for Robert F. Kennedy and onetime New York Mayor John Lindsay. In this book, Greenfield probes what might have been if on that rainy day in Dallas the sun had not come out and the plastic “bubble” on the presidential car had not been removed. If it had stayed on, Greenfield plausibly posits, the shots that hit the president might have been serious, but not fatal.

Kennedy was hardly, in his personal life, a saint, and Greenfield does not gloss this over. But he does not, to his credit, dwell on personal faults, but deals with the major issues of the time.

He shows how Kennedy might have pushed through voting rights and equality for those Americans whose families came to this country not as immigrants seeking a better way of life but tragically as slaves, forcibly sent into a system of segregation that was even in Kennedy’s time all too prevalent not only in the South, where slavery flourished, but in the North and West as well.

Greenfield narrates how a JFK who survived an assassin’s bullet, if only barely, might have acted to bring the American troops home from Vietnam, changing the course of American history.

The book is not perfect. Different readers may object to certain details. But his creation of Kennedy’s speeches in his re-election run and second inaugural address, as well as the humor-filled banter around the Kennedy dinner table, struck me was being well within the criterion of plausibility that Greenfield sets as his measure.

This is a book for anyone interested in American history, how it happened and how it might have happened “if.” Greenfield does not raise the issue, but one knowledgeable about Catholic history can also discern how the Second Vatican Council might have influenced Kennedy and, through him, America, for the better.