Mary’s ‘way of loving, believing’ an example for all, says actress 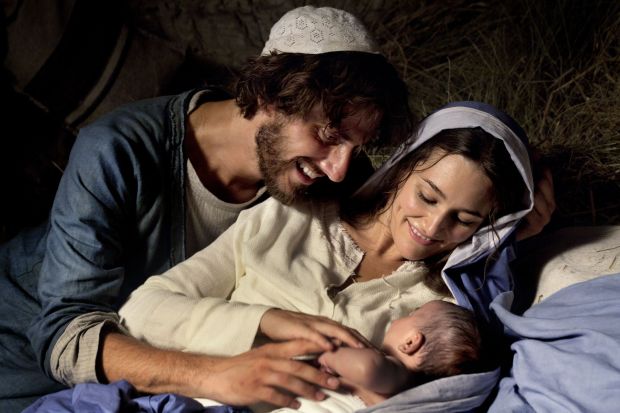 Luca Marinelli portrays Joseph and Alissa Jung as Mary in a scene from the movie "Mary of Nazareth." (CNS photo/courtesy of Ignatius Press)

COLORADO SPRINGS, Colo. (CNS) — Preparing for the title role in “Mary of Nazareth” helped German actress Alissa Jung to realize that Mary was not only the mother of God but a real person.

“Before doing this film, Mary was always the mother of Jesus, but I didn’t think of her as an interesting person,” Jung said. “I was really taken by her. Her way of loving, giving and believing is a big example, and she’s a wonderful person. I think I changed my perspective.”

“Mary of Nazareth” is a European-made film shot largely in Tunisia that is being distributed by Ignatius Press in the United States.

Jung has been acting in television shows and movies since she was 16 years old and currently resides in Berlin. When her agent first contacted her about auditioning for the role in “Mary of Nazareth,” she resisted because she was on the verge of leaving for a trip to Haiti, where she heads a nonprofit organization that sponsors schools. Her agent urged her to read the screenplay and submit a prerecorded audition anyway.

“When they called me, I was sitting on my luggage waiting for my flight to Haiti,” Jung said. “In the end, to please my agent, I did this little videotape at home sitting in front of my computer.”

Once she returned from Haiti, Jung not only got called to Rome for an audition but she replaced another actress who had been initially chosen to play the role.

At first, the thought of playing the mother of God was overwhelming, Jung said. An added challenge was that the movie was going to be filmed entirely in English.

“The first two days I was a bit shocked. Then I calmed myself down and said, ‘First of all, you are interested in the human being, you are not interested in being an icon,'” Jung told The Colorado Catholic Herald, newspaper of the Diocese of Colorado Springs.

From the point of view of an actress, the role presented a challenge because Jung had to simultaneously convey both the joy of Mary’s motherhood and her sorrow in knowing Jesus would die.

“That was really interesting to me as an actress, to have the possibility of having this huge conflict — to believe in something and lose your son for this,” Jung said.

Jung, who is not Catholic, said that filming the movie was also an enjoyable experience because the storyline prompted a lot of reflections about faith among the cast and crew.

Anthony Ryan, director of sales and marketing for San Francisco-based Ignatius Press, said that “Mary of Nazareth” will help both Catholics and non-Catholics come to a deeper understanding of Mary’s life.

“She had to be a woman of great faith and mystery,” Ryan said, adding that those who watch the film will understand why she is sometimes called Our Lady of Sorrows.

Italian director Giacomo Campiotti has made a personal decision only to make films that are spiritually uplifting, Ryan said, adding that Campiotti chose actors from various countries in an effort to get the strongest cast possible for “Mary of Nazareth.”

In Jung, “he saw something that captured his heart and mind,” Ryan said.

Ignatius is working with Catholic organizations around the country, such as schools and Knights of Columbus councils, to set up screenings of the movie at commercial theaters. Organizations are using the movie as an opportunity to evangelize their local communities and also as a fundraiser, he said.

So far, roughly 120 showings have taken place, Ryan said, and Ignatius hopes to keep the movie in theaters through Easter.

More information about “Mary of Nazareth” and a trailer of the film can be found at www.maryfilm.com.

Ambuul is assistant editor of The Colorado Catholic Herald, newspaper of the Colorado Springs Diocese.

NEXT: Mandela: Long Walk to Freedom