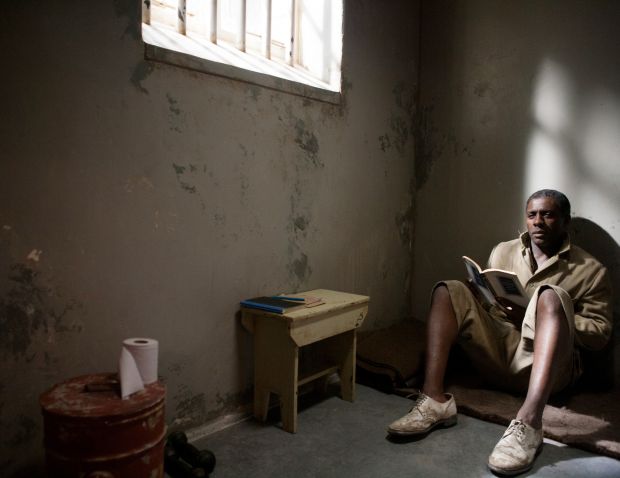 Idris Rlba stars in a scene from the movie "Mandela: Long Walk to Freedom." (CNS photo/Weinstein)

NEW YORK (CNS) — Those who subscribe to the “great man” theory of history — the idea that the optimum way to understand the past is to study the lives of key individuals — won’t find a better example than South African dissident-turned-president Nelson Mandela.

That’s one conclusion to be drawn from “Mandela: Long Walk to Freedom” (Weinstein) — a hagiographic film glowing with admiration for its protagonist and bent on demonstrating the historical significance of his personal journey.

Adapted from Mandela’s 1994 autobiography, the handsome movie may not sufficiently acknowledge how other persons and forces contributed to the dismantling of apartheid. But Mandela’s espousal of forgiveness and peace certainly comes across as crucial in determining the course of his native country’s history.

Still, the cinematic limitations of “Mandela” illustrate the pitfalls of approaching history through a too-narrow prism. In sum, the glossy presentation has a static quality, as if the filmmakers are trying to preserve Mandela’s legacy in amber.

To be a truly outstanding biopic, it would have to plumb the depths of Mandela’s character with more incisiveness and make his internal struggle more dynamic. It’s never clear what underpins his wisdom and moral courage.

Director Justin Chadwick leans too heavily on flashbacks to Mandela’s coming-of-age ceremony and dream images of the golden fields surrounding his childhood village. Their explanatory power is minimal.

The narrative spans the majority of Mandela’s adult life — from 1942, when he was a lawyer in Johannesburg, to his election as president in 1994. After joining the African National Congress, Mandela quickly became a leader in the struggle against the minority Afrikaner government. He helped organize a sabotage campaign and was arrested and sentenced to life along with seven colleagues in 1964.

Of Mandela’s 25 years in prison, 18 were spent on Robben Island. After transferring him to a less forbidding mainland facility, the government began negotiating with Mandela — sans his cohorts — about his release and what would follow when white rule ended.

Despite the emphasis on a single agent of change, it’s not Mandela’s story alone. The experience of his second wife, Winnie (Naomie Harris), serves as schematic counterpoint. During his long absence, she is harassed, arrested and mistreated by police. Fueled by hatred, she publicly embraces violence and advocates revenge.

“What they have done to my wife is their only victory,” Mandela declares.

British actor Idris Elba brings a robust physicality to the title role. And although his accent tends to fluctuate, William Nicholson’s cautious screenplay and the film’s lionizing tack are mostly responsible for any lack of texture in the portrayal.

Mandela’s greatest flaw appears to be his inveterate womanizing and adulterous behavior. By romanticizing his dalliances, the picture makes this aspect of his personality all the more difficult to excuse — more difficult, even, than his decision to abandon nonviolence prior to his incarceration.

The fact that Mandela became the face of his movement challenged a guiding principle of the ANC, namely, that no single person can oppose apartheid as effectively as multiple individuals banded together. Inadvertently, the film’s polished aesthetics also call into question the efficacy of one person acting alone, no matter how great he or she may be.

Early on, tasteful period details seem to belie the harsh conditions for nonwhites. And later, one wonders what effect the special treatment and relatively cushy conditions the government affords Mandela have on his decisions.

Ultimately, however, it’s clear that he is not being driven by vanity, self-aggrandizement, self-pity or the desire for material comfort. Instead, the movie makes a powerful case for concluding that Nelson Mandela’s greatest virtue as a statesman was his ability to look beyond his own personal circumstances and discern what was best for his nation as a whole.

Without obscuring the injustice, “Mandela: Long Walk to Freedom” remains at a distance from the brutality and anguish of apartheid, in part by never being too graphic. Nevertheless, it is best suited to adults.

The film contains considerable violence — including many gun battles, bombings and an immolation — demeaning treatment of prisoners, a half-dozen premarital and adulterous sexual situations, though without nudity or explicit activity, as well as some crude language and hate speech. The Catholic News Service classification is A-III — adults. The Motion Picture Association of America rating is PG-13 — parents strongly cautioned. Some material may be inappropriate for children under 13.

PREVIOUS: Mary’s ‘way of loving, believing’ an example for all, says actress

NEXT: Movie review: ‘Out of the Furnace’