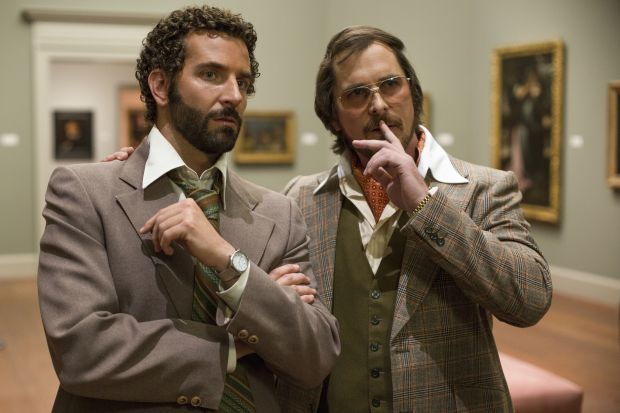 Bradley Cooper and Christian Bale star in a scene from the movie "American Hustle." (CNS photo/Sony)

Russell and co-screenwriter Eric Warren Singer see the decade as a time when people are fixated on self-actualization — reinventing themselves by continually affirming their goals and engaging in the necessary role-playing until they become who they want to be.

Since this entails deception, often of the larcenous kind, the filmmakers can easily graft their idea of self-creation onto the Abscam scandal, which grew out of a real-life FBI sting that nabbed seven U.S. members of Congress on bribery charges. To give the fictionalized story a stylistic flair consonant with its main themes, dynamic use is made of the period’s music, fashion, beauty and decor trends.

By turns a comedy, crime farce, romance and con-game thriller, “American Hustle” hinges on the tension between aspiration and delusion, noble intentions and bad results. Its tone is simultaneously mocking and sympathetic; laudable tolerance and hints of moral relativism are both detectable. But viewers committed to scriptural values face two immediate hurdles: the movie’s ceaseless barrage of vulgar language and its emphasis on carnality.

The lengths to which a person will go to maintain his or her facade are evident during the memorable opening scene. Inside a suite at New York City’s Plaza Hotel, paunchy, middle-aged Irving Rosenfeld (Christian Bale) engages in an elaborate grooming ritual designed to project the illusion he has a full head of hair. Surprisingly, watching his painstaking comb-over routine engenders compassion.

It’s 1978 and Irving and his voluptuous flimflam partner, Sydney Prosser (Amy Adams), have similar motivations. Each wants a “better, more elegant life,” so they team up to fleece people in desperate financial straits. The small-time scammers are also in love, having bonded over Duke Ellington and shared sartorial tastes.

Alas for them, their run is ended by FBI agent Richie DiMaso (Bradley Cooper), who forces them to help him entrap politicians using a fake Arab sheik eager to invest in Atlantic City casinos. Richie’s career ambitions are stoked by his lust for Sydney. Boorish and dimwitted, he’s the last person anyone would peg as a fed in an undercover operation.

The first target of his harebrained scheme is Carmine Polito (Jeremy Renner), the mayor of Camden, N.J., and a passionate exponent of bringing gambling-related jobs and revenue back to the Garden State.

Everything begins to unravel courtesy of Irving’s unstable wife, Rosalyn (Jennifer Lawrence). Then the Mafia gets involved. As in most grifter scenarios, the question becomes: Who’s playing whom?

The appeal of “American Hustle” is traceable to the delight it takes in recreating the gaudy styles of the 1970s; to its soundtrack featuring songs by, among others, David Bowie, Paul McCartney and Steely Dan; and to the effusive performances of the five principal actors, four of whom have recently collaborated with Russell — Bale and Adams in “The Fighter,” Cooper and Lawrence in “Silver Linings Playbook.”

In addition, the picture is fundamentally optimistic. Objectionable content notwithstanding, Russell seeks the good beneath the venal. And yet, while he doesn’t glorify criminal chicanery, moral culpability is measured on a curve that takes into account the perpetrator’s intentions.

Irving argues that, ethically speaking, the world is more gray than black-and-white. Rosalyn expresses a kindred idea when she claims the finest perfumes are all laced with nasty scents, subtle yet unmistakably foul notes that counterbalance the pleasing aroma.

In “American Hustle,” Russell displays sympathy for his characters but is not above ridiculing them or trying to mine laughter from cruelty and humiliation. His attempt to negotiate the line between ugly caricature and a positive outlook with harsh undertones is not entirely successful. Too often, moviegoers will sense disrespect and condescension, leading to the conclusion that somebody is trying to make a sucker out of them.

NEXT: Movie review: Walking With Dinosaurs