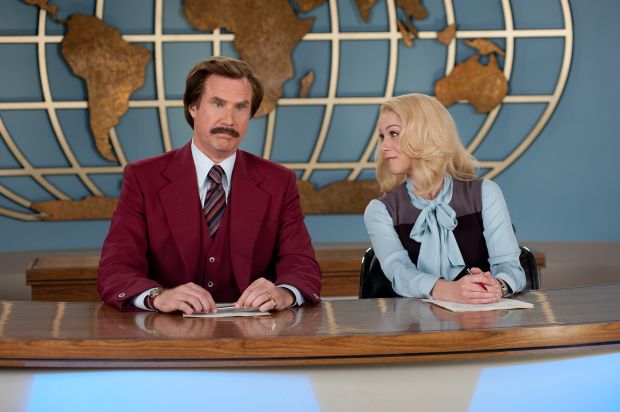 Will Ferrell and Christina Applegate star in a scene from the movie "Anchorman 2: The Legend Continues." (CNS photo/Paramount)

Will Ferrell’s Burgundy, last seen in the 1970s heyday of flashy local news in San Diego, moves into 1980 and the dawn of 24-hour cable news. His wife Veronica Corningstone (Christina Applegate), with whom he co-anchors a newscast in New York, is promoted to a network position, while Ron is fired.

Ron gives Veronica a choice of her lucrative new job or sticking with their marriage, which — surprise! — backfires on him. After failing as an emcee of the dolphin show at Sea World, he regroups with his old sidekicks: dimwitted weatherman Brick Tamland (Steve Carell), racist sportscaster Champ Kind (David Koechner), and sensual but competent reporter Brian Fantana (Paul Rudd).

The new Global News Network, funded by Australian tycoon Kench Allenby (Josh Lawson), gives them all a chance to restart their careers, even though they’ve been assigned the dismal 2 a.m.-to-5 a.m. timeslot. Meanwhile, Ron has to try to reconnect with 7-year-old son Walter (Judah Nelson) and deal with Veronica’s new relationship with sensitive psychologist Gary (Greg Kinnear).

Ron’s only ever had a single goal: “Have salon-quality hair and read the news.” Now he knows he has to succeed as a parent to his long-ignored son.

Ron’s not known for his deep thoughts, at one point asking, “Who the hell is Julius Caesar? You know I don’t follow the NBA!” But on his first night in cable news, he suddenly has an epiphany: “Why do we tell people what they need to hear? Why can’t we tell them what they want to hear?”

So — presumably in the Fox News mold — he transforms himself into a jingoistic ranter who only wants to proclaim what’s good about America, Champ gets his sportscasts down to one-second clips accompanied by “Whammy, whammy, whammy!” and Brick warns only of impending catastrophes.

This satire, directed by Adam McKay, who co-wrote the script with Ferrell, is done in by gags left over from the first film, including an identical clash of anchors from other networks. These characters are amusing in small doses but can’t sustain a plot. Brick’s racism, intended as comic, is instead off-putting, as is a scene in which Burgundy offends the African-American family of his boss and current romance, Linda Jackson (Meagan Good).

The film contains a scene of nongraphic premarital sexual activity, drug use, some racist dialogue, fleeting sexual banter and profane language and frequent crude and crass terms. The Catholic News Service classification is A-III — adults. The Motion Picture Association of America rating is PG-13 — parents strongly cautioned. Some material may be inappropriate for children under 13.