“What’s So Blessed About Being Poor: Seeking the Gospel in the Slums of Kenya”
by L. Susan Slavin and Coralis Salvador.
Orbis Books (Maryknoll, N.Y. 2013) 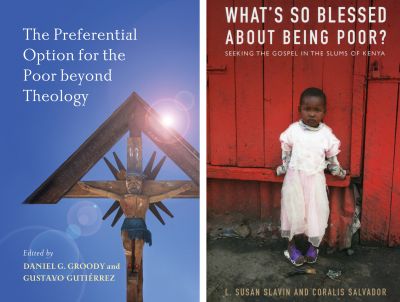 These are the covers of “The Preferential Option for the Poor Beyond Theology,” edited by Daniel G. Groody and Gustavo Gutierrez, and “Whats So Blessed About Being Poor: Seeking the Gospel in the Slums of Kenya,” by L. Susan Slavin and Coralis Salvador. (CNS)

In the second half of the 20th century, liberation theology stood traditional Catholic social teaching on its head. It didn’t apply moral and ethical principles to specific situations. Instead, liberation theologians started with concrete situations. Analyzing these from the perspective of the poor, they then looked to the Bible for values and examples shedding light on modern realities.

With the Exodus as an example, liberation theology saw the need to free people from material as well as spiritual bondage. Poverty was regarded as a byproduct of unjust socio-economic and political structures and the poor as the collateral damage needed to maintain these systems.

“Hence the poverty of the poor is not a call to generous relief action, but a demand that we go and build a different kind of social order,” wrote Dominican Father Gustavo Gutierrez, the father of liberation theology, in 1983.

Liberation theology added new terms to Catholic social thinking such as “situations of sin” and “institutional violence.” Yet the term that has produced more fire in Catholic minds is the “option for the poor,” later modified to the “preferential option for the poor” to stress that it is not at the exclusion of other socio-economic classes.

These three books retell how people made this “option for the poor” a part of their personal and professional lives by helping empower poor people to determine their own destinies as individuals and as members of a wider community facing common problems.

“The Preferential Option for the Poor Beyond Theology” consists of 12 essays by academic and professional people about their efforts to assist and show solidarity with the poor.

One highly informative chapter is by Kristin Shrader-Frechette, biological science professor at the University of Notre Dame. She notes that poor neighborhoods in the United States are prime locations for garbage incinerators and toxic waste dumps because the residents, as opposed to economically better-off people, can’t afford to hire lawyers and independent scientific researchers to fight these decisions. She and her science students provide free research to such communities to counter the often misleading environmental impact studies done by companies downplaying the health and environmental hazards of these dumps and incinerators.

“In the Company of the Poor” is somewhat disappointing. Much of it is previously published works by Father Gutierrez and Dr. Paul Farmer, a physician who was inspired by liberation theology and is a founder of Partners in Health, a private organization that provides health and advocacy services for people in poor countries. The new material is basically a conversation between the two on liberation theology as a motivating force.

Yet there is no mention of Father Gutierrez’s use of aspects of Marxist social analysis, such as class struggle, to describe the social realities in Latin America that gave rise to liberation theology. It would be interesting to know whether in the post-Cold-War era of economic globalization Father Gutierrez, a Peruvian, still sees a role for Marxist concepts in understanding some of the root causes of poverty.

On the positive side, the book presents a detailed exposition of the strongly biblical spirituality behind liberation theology, something often missed by people focusing on its political implications.

“What’s So Blessed About Being Poor” is the easiest read. It tells the story of two women lay missionaries working in the slums of Kenya with children who have AIDS. The women cite liberation theology as one of their motivating forces, but the bulk of the book is the story of their activities and discoveries about the difficulties of dealing with people’s health problems without understanding how this is a byproduct of their surrounding poverty. Many young girls, for instance, contracted AIDS because they were forced into prostitution to earn money.

It describes real people facing real suffering and shows how positive interaction between the missionaries and the people they are helping can fortify the spirituality of all, as well as improve material conditions.

PREVIOUS: Is Keanu Reeves the One to save ’47 Ronin’?

NEXT: Not a stitch of clothing on this vicious ‘Wolf’