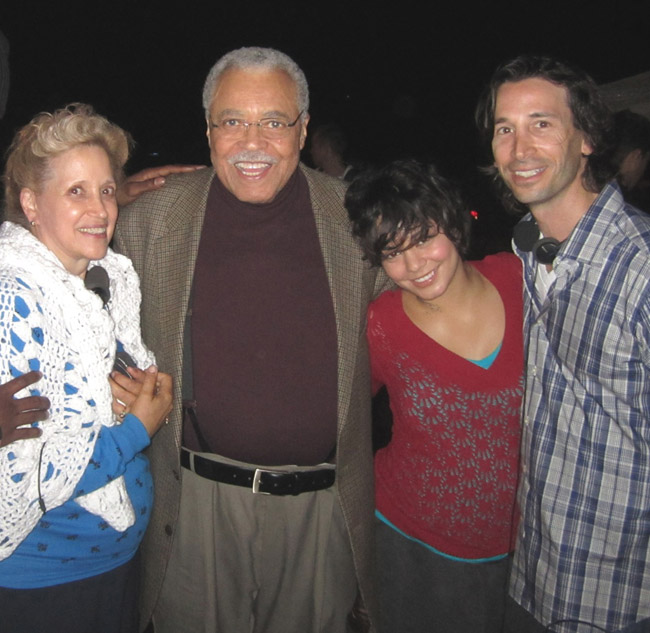 Kathy DiFiore (left), on whom the movie "Gimme Shelter" is based, poses with stars of the movie (from left) James Earl Jones, Vanessa Hudgens and director-writer Ronald Krauss. The movie tells the powerful story of a teenager faced with desperate choices when she finds herself pregnant and homeless in New Jersey and how meeting people who cared changes her. (CNS photo/Roadside Attractions)

ARLINGTON, Va. (CNS) — Every day, Kathy DiFiore, who helps young unwed mothers in need and their children with shelter and support, tells God that she wants to do his will.

“And if I’m not doing what he wants, he has a right to pick up his divine two-by-four, hit me over the head a couple times and I’ll pay attention,” she said.

DiFiore’s conviction that God repeatedly was asking her to share the stories of the mothers she works with eventually led to the movie “Gimme Shelter,” now in theaters.

The movie — starring Vanessa Hudgens, Rosario Dawson, Brendan Fraser and James Earl Jones — tells the powerful story of a teenager faced with desperate choices when she finds herself pregnant and homeless in New Jersey and how meeting people who cared changes her.

The movie was inspired by real events that took place in DiFiore’s shelters, which have been providing assistance to unwed mothers on the East Coast for more than 30 years. Called Several Sources Shelters, the network includes a shelter for homeless women.

“I like everything involved with helping them solve their problems, bringing God into their lives, helping them to focus on motherhood, one baby at a time,” she said in an interview with the Arlington Catholic Herald, newspaper of the Diocese of Arlington. “It is all about quality and not quantity.”

DiFiore started the first shelter at her house in 1981, following an inspiration she had while reciting the prayer of St. Francis of Assisi. She never thought that her network would save thousands of babies while sheltering young mothers, and providing them with education, ongoing support and guidance.

These mothers and DiFiore were involved in the writing and production of the film — which would have seemed impossible before meeting award-winning director Ronald Krauss almost four years ago.

Krauss stopped by one of the shelters during a trip to see his brother in New Jersey over Christmas; he first heard about DiFiore’s work in 2009.

In an interview with The Colorado Catholic Herald, newspaper of the Colorado Springs Diocese, he said he was so affected by what he saw that he lived there for a year, interviewing many of the shelter’s residents and observing DiFiore’s work.

Upon returning to Hollywood in 2011, he wrote the script for “Gimme Shelter” and chose the cast members. But the film industry was skeptical.

“You’re going against the grain. People don’t want films like this; there was a lot of resistance,” Krauss said.

He decided to do the filming at one of the Several Sources shelters in Ramsey, N.J., where DiFiore’s office is located. Many of the young mothers and their babies are featured in the movie.

“People were telling me that I needed to go to a place like Georgia to save money. This movie could never have been made elsewhere,” Krauss said.

Despite their initial skepticism, two major studios — Lionsgate in the U.S. and Sony Pictures overseas — agreed to distribute the movie. Krauss said “Gimme Shelter” will be showing in at least 400 theaters.

DiFiore told the Arlington Catholic paper that the young women in the shelter “really confided in” Krauss, “and as they began to open up to him, I got a little message in my head that God was saying to me, ‘Trust him.’ In other words, all these years have gone by and now it’s the time to share the story.”

The young mothers were open to the idea of sharing their testimonies so they could help other girls in similar situations.

In Washington, after a Jan. 7 screening of “Gimme Shelter,” Krauss told the audience that one of the girls from the shelter had inspired him to make a feature film instead of a documentary. He met her outside the shelter during a January night three years ago.

“I thought she lived there. She thought I worked there and I let her in,” Krauss recalled. “Kathy told me that they did have a bed available and to tell her she could stay. … I did it without thinking much of it.” He later learned that the pregnant teenager had walked about 30 miles in the cold to get to the shelter.

“When she heard there was room for her, she grabbed me and hugged me so hard she almost knocked me over,” he said. “That hug was the inspiration for the movie.”

The plot of “Gimme Shelter” centers on a teenage girl named Apple Bailey (Hudgens), who has grown up in a series of foster homes after being taken away from her drug-addict mother. When she finds out she is pregnant, she turns to the father she has never known (Fraser), but he refuses to help her if she keeps her baby.

With the help of a Catholic priest (Jones), Bailey finds refuge in one of the shelters run by DiFiore (Ann Dowd).

The independent film has been hailed by pro-life groups and has been recommended by, among others, New York Cardinal Timothy M. Dolan, who praised its “uplifting message of hope and the dignity of life,” and Bishop Ignacio Carrasco de Paula, president of the Pontifical Academy for Life.

Although the movie does not shy away from depicting harsh realities, it is permeated with hopeful moments when Apple opens up to the other teenagers.

In addition to caring for their babies and participating in an educational program, the girls can participate in Bible study and may attend any of the different churches in the area. DiFiore said that part of the mission of Several Sources is that the mother has to learn about God, to transmit it to her children.

A link on the movie’s website — gimmeinspiration.com — takes visitors to a list of more than 530 shelters across the nation and to the real mothers’ stories.

NEXT: Much more than pie-making going on in ‘Labor Day’