Much more than pie-making going on in ‘Labor Day’ 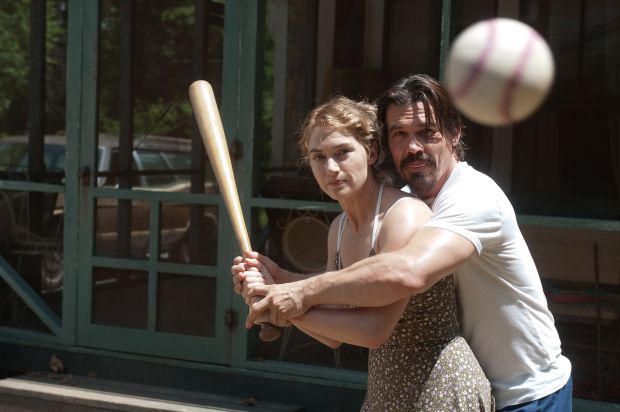 Kate Winslet and Josh Brolin star in a scene from the movie "Labor Day." (CNS photo/Paramount)

NEW YORK (CNS) — Many of the elements that make one or another film objectionable are happily absent from the glossy romantic drama “Labor Day” (Paramount).

Violence is minimal; a single misuse of the Lord’s name aside, the dialogue is free of taint; and the movie’s portrayal of sexuality is restrained throughout.

Yet the joy of physical passion is one of the primary themes in writer-director Jason Reitman’s screen version of Joyce Maynard’s best-selling 2009 novel. Consequently, the proceedings are permeated with subtly handled but unmistakable sensuality.

The improbable nature of the plot is equally impossible to miss, despite such potential distractions as the picture’s engagingly bucolic look and the skillful performances turned in on all sides.

Adult narrator Henry Wheeler (Tobey Maguire) introduces the bulk of the film in the form of a sustained flashback to his childhood. As a lad of 13 (Gattlin Griffith), Henry is living with — and looking after — his depressed, reclusive mother, Adele (Kate Winslet), a divorcee from whose emotional problems Henry’s dad (Clark Gregg) has sought refuge in the arms of his secretary, now Henry’s stepmom.

As the 1987 observance of the titular holiday weekend begins, the need to update Henry’s wardrobe for the forthcoming school year forces Adele to take a rare drive into town. There she and Henry accidentally cross paths with escaped convict Frank Chambers (Josh Brolin), who appeals to them — not without an unstated threat of violence — to give him temporary shelter in their home. Reluctantly, they comply.

Frank, however, turns out to be quite the houseguest. After assuring his initially intimidated hosts that the case against him is not what it seems, he endeavors to earn his keep by doing various manly domestic chores: repairing a loose step here, quieting a squeaky hinge there. If this endears him to unable-to-cope Adele, a batting lesson is just the thing to win paternally neglected Henry’s heart.

Though he may be a handyman and a jock — not to mention a convicted murderer — Frank has his softer side too, as he demonstrates by teaching Adele and Henry how to bake a peach pie. Viewers of the trailer for “Labor Day” will know that this process, from which Henry is eventually excluded, takes on a more-than-culinary significance, Frank’s concern for the flakiness of his crust notwithstanding.

It’s a hop, skip and a jump from the kitchen to the bedroom where Frank and Adele’s first romp — they’ve now known each other for all of 36 hours — is sufficiently enthusiastic to be overheard by Henry. The muffled sounds turn the sleepless young man’s fancy not so much to thoughts of love as to the remembered sight of one of his classmate’s bra straps.

Indeed, as Frank stokes the banked fires of Adele’s eroticism, her carnal revival is uncomfortably juxtaposed with Henry’s emerging sexuality. Though our glimpses of the latter only hint at anything beyond a first kiss, the placement of them in tandem with Adele’s carryings-on feels queasy. All the more so, since Henry eventually harbors oedipal suspicions that he’s been displaced in Adele’s affections and that she plans to abandon him by running off to Canada with her wanted man.

It’s no spoiler to reveal that Adele and Frank’s love shows itself, in the end, ready for the long haul. But that doesn’t alter the fact that their relationship took on a physical dimension long before the nature of their bond was, shall we say, ripe?

The film contains fleeting violence, brief semi-graphic premarital sexual activity, another unseen but audible encounter of the same nature, at least one use of profanity and several sexual references. The Catholic News Service classification is L — limited adult audience, films whose problematic content many adults would find troubling. The Motion Picture Association of America rating is PG-13 — parents strongly cautioned. Some material may be inappropriate for children under 13.

NEXT: Cinema’s heavy hitters carve out ‘The Monuments Men’