‘Shadow Recruit’ calls up a next generation Jack Ryan 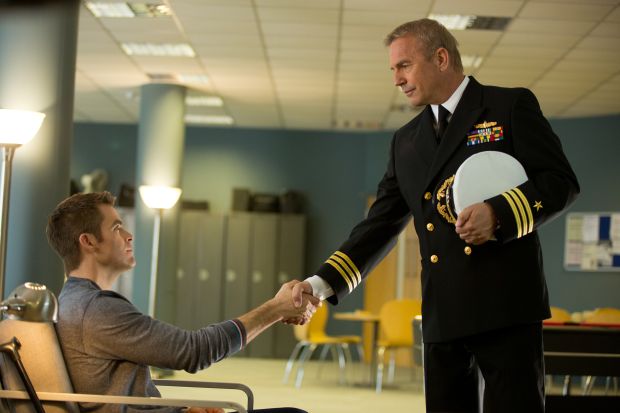 Chris Pine is Jack Ryan and Kevin Costner star in a scene from the movie "Jack Ryan: Shadow Recruit."

Spread across more than a dozen books and four film adaptations, his exploits have kept readers and viewers engaged, some of them riveted, ever since his first appearance between the covers of “The Hunt for Red October” 30 years ago.

In crafting the enjoyable origin-story thriller “Jack Ryan: Shadow Recruit” (Paramount), director Kenneth Branagh, who also plays the movie’s principal villain, provides mature viewers with a diverting adventure. The level of mayhem as well as other considerations, however, bars recommendation for youngsters.

Though originally a baby-boomer, in this iteration Ryan (a likable Chris Pine) is young enough to be studying at the London School of Economics on 9/11. He reacts to the events of that day by joining the Marines, only to be wounded in a helicopter crash in Afghanistan.

While recovering, Ryan makes two significant connections: Romantically, he bonds with his physical therapist, Cathy Muller (Keira Knightley), who becomes his live-in girlfriend. Professionally, he catches the eye of CIA operative William Harper (Kevin Costner), who recruits him as a financial analyst for the agency.

Planted undercover at a Wall Street firm, Ryan eventually comes across evidence of portentous investment manipulations by sinister Russian oligarch Viktor Cherevin (Branagh). Only Ryan, it soon develops, can foil Cherevin. But to do so, he’ll have to cross the line from desk work to perilous field activity.

What follows is slick, clever and fun. Morally, the picture gains credibility from Ryan’s evident qualms about the use of fatal force. Compelled to take out an adversary in a kill-or-be-killed situation, he’s shown to be both shaken and haunted by the incident.

Ryan’s relationship with Cathy would likely be more ethically acceptable except for the fact that their shacking up together, but stopping short of marriage, serves to advance the plot. Ryan is only authorized to tell Cathy the real nature of his work once she becomes his wife. For reasons not really explained, however, she initially turns down his proposal (made, in an all-too-modern manner, when the two are in bed together).

This leaves Cathy free to stumble unknowingly into danger once Ryan goes after Cherevin. Later, though, the engagement seems to be a done deal. In fact, Cathy’s diamond ring becomes a significant prop since it has special capabilities that fit in with the story but that can’t be specified here for fear of a spoiler.

Strangely, the Russian Orthodox Church gets dragged into the proceedings in an incidental but less than flattering way.

As a choir chants in the background, ultra-nationalist Cherevin is shown lighting a candle in church and praying for the success of his malign project. Subsequently, his underlings are alerted to the fact that the time has come to put his scheme into action by a liturgical reading that serves as a coded signal.

Whether the clergyman reciting the telltale passage is in on the plan remains unclear. But it’s safe to assume that Orthodox believers will not be pleased by this portrayal of their community. Though too fleeting to be really offensive, it’s an unwelcome ingredient in an otherwise mostly pleasing recipe.

The film contains some harsh violence, much bloodless gunplay, images of gory combat wounds, premarital cohabitation, instances of profanity and crude terms. The Catholic News Service classification is A-III — adults. The Motion Picture Association of America rating is PG-13 — parents strongly cautioned. Some material may be inappropriate for children under 13.