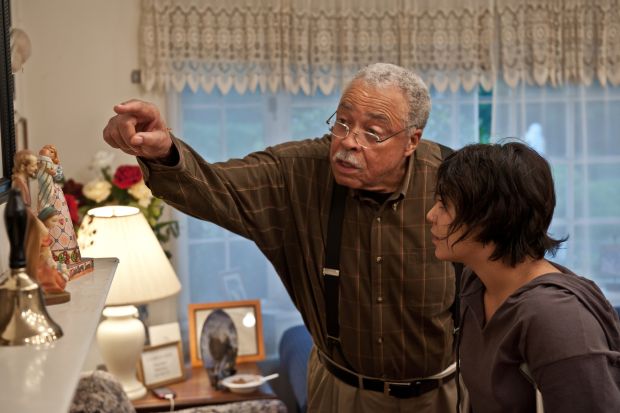 NEW YORK (CNS) — Perhaps the best moment in the fact-based drama “Gimme Shelter” (Roadside) comes when its beleaguered, deeply sympathetic protagonist, played by Vanessa Hudgens, wonderingly recites a passage from the Book of Psalms that tells of God’s promises to those who trust in him.

It’s a moving scene precisely because such faith-based optimism seems so far removed from all that Hudgens’ character, teenager Agnes “Apple” Bailey, has previously endured.

Long neglected by her drug-addicted, emotionally unstable mother, June (Rosario Dawson), Apple is also a veteran of numerous foster homes — in one of which, we eventually learn, she was sexually abused by the father of the family to which she had been entrusted.

As the film begins, Apple has understandably had enough of June’s manipulative ways. So she flees the inner city, and seeks out her estranged, wealthy father, Tom Fitzpatrick (Brendan Fraser), the owner of a luxurious mansion in an upscale New Jersey suburb.

Though taken aback by Apple’s arrival — he comes home to find the scruffy runaway being carted off by the police, who’ve mistaken her for a thief — Tom is at least tentatively willing to do his part for the girl. Apple gets a colder reception from Tom’s wife, Joanna (Stephanie Szostak), who’s intent on pursuing her ultra-respectable lifestyle undisturbed. (Tom and Joanna’s two young kids look as though they’ve just stepped out of a Brooks Brothers catalog.)

Joanna’s attitude grows even chillier when a bout of morning sickness tips all concerned off to the fact that Apple is pregnant. Both Joanna and Tom pressure Apple to have an abortion. But she insists on keeping her child, even if it means losing the security of her newfound refuge.

Back on the streets, Apple has an altercation with a predatory passerby that ends with her stealing — and crashing — the lowlife’s car. This turns out to be a positive development because it brings her into contact with kindly hospital chaplain Father Frank McCarthy (James Earl Jones).

Father Frank is, of course, wholeheartedly supportive of Apple’s determination to preserve the life of her baby. He offers her the opportunity to take up residence with his redoubtable friend, Kathy (Ann Dowd), the founder of a home for expectant adolescents.

Modeled on Kathy DiFiore, who established just such a ministry — called Several Sources Shelters — in 1981, Dowd’s character is gentle but firm, both with her charges and with any outsider who might threaten their welfare. Down-to-earth practicality, tough love and a belief in the need for structure characterize her approach.

Chaffing under such discipline, Apple finds herself tempted to escape it. But she simultaneously discovers a winning new aspect of life through her burgeoning friendship with the other moms-to-be.

Yet, perhaps because fidelity to the facts has been prioritized over dramatic structure, the story unfolds at a deliberate pace that may be too leisurely for some viewers. Others may sense something approaching a documentary tone in this unhurried timing and the absence of artificial plot turns.

Whichever stance individual moviegoers may take toward Krauss’ fictionalized account, the lifesaving reality standing behind it is worthy of universal support and celebration. The educational value and moral impact to be derived from the screen portrayal of this real-life work, moreover, allow for cautious endorsement of it for older teens, despite the elements listed below.

The film contains mature themes, including molestation, out-of-wedlock pregnancy and substance abuse, a scene of disturbing, though not gory, violence, at least one rough term and a handful of crass expressions. The Catholic News Service classification is A-III — adults. The Motion Picture Association of America rating is PG-13 — parents strongly cautioned. Some material may be inappropriate for children under 13.

PREVIOUS: ‘Shadow Recruit’ calls up a next generation Jack Ryan