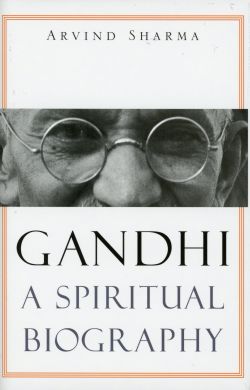 Mohandas K. (Mahatma) Gandhi (1869-1948) is a legendary figure to millions around the world, celebrated for leading India to political independence from Britain. While innumerable biographies and histories have been written about him, few have focused on his spirituality.

Now Arvind Sharma has produced the definitive spiritual biography, a carefully researched and written book that will help Catholics understand why, for example, the U.S. bishops some 30 years ago cited Gandhi’s example of pacifist resistance to violence and war as an acceptable moral option.

In their 1983 pastoral letter on war and peace, what was then called the National Conference of Catholic Bishops observed that the nonviolent witness of Gandhi, Catholic Worker co-founder Dorothy Day and the Rev. Martin Luther King Jr. “has had profound impact upon the life of the church in the United States.”

Sharma reveals the deeply spiritual wellsprings of this pacifist nonresistant vision, quoting Gandhi’s disclosure in his own autobiography that “what I want to achieve — what I have been striving and pining to achieve these 30 years — is self-realization, to see God face to face. All that I do by way of speaking and writing, and all my ventures in the political field, are directed to this same end.”

To him, morality and religion were synonymous. Also, as a Hindu, he believed in reincarnation and rebirth; this perspective infused his view of life as a spiritual experience. So focused was he on the life of the spirit, Sharma points out, that at the end of his life, Gandhi had only very few material possessions such as a watch, sandals and spectacles.

Sharma, the Birks professor of comparative religion at McGill University in Montreal, won the 2013 Hindu American Foundation’s Mahatma Gandhi Award for the Advancement of Religious Pluralism.

He demonstrates convincingly that it was Gandhi’s spirituality, and not his political savvy or his personal qualities, that most led to his phenomenal success as a leader. He asserted the rightness of protesting and resisting injustice, but his appeal to the conscience motivated the oppressed colonials to accept, without retaliating, the unrelenting blows, vicious kicks to the crotch, and even death that came from the imperial police.

This spiritual practice of turning the other cheek connects Gandhi in a significant way to Christians, who also struggle with the concept of employing the “weapons of the spirit” against evil. Such armaments are not always uniformly successful; at least some blood is inevitably shed in the course of nonviolent resistance, Sharma writes, because those whom the status quo benefits don’t easily give up their advantages. Gandhi knew this, but he still counseled “that we must voluntarily undergo the suffering it takes to change another person’s heart. If one perishes in the attempt, one leaves behind an imperishable legacy.”

Sharma avoids the temptation of hagiography, portraying Gandhi in the full range of his humanity — including, for example, his lack of a completely satisfactory relationship with his sons. He wanted them to follow in his footsteps, but that was neither their wish nor their mother’s. As Sharma quotes Gandhi, writing in his autobiography, “I did not prove an ideal father.”

Also, Gandhi’s experiment to test his vow of celibacy may raise questions. In 1946, to gauge the depth of his commitment to chastity, the 77-year-old slept naked one night in the same bed as his 18-year-old niece. By doing so, Sharma explains, “he was testing his vow of celibacy by ascertaining whether the situation aroused any sexual stirring in him or her. He had to be so pure that even the other gender had no sexual reaction.”

What he may have overlooked is that, consciously or unconsciously, he may have been exploiting the young woman. On the other hand, she was so much like a granddaughter to him that this was likely not a good test of his vow. Ultimately, Gandhi seems to have largely succeeded in relating to women as fellow human beings rather than as objects in a patriarchal culture.

Sharma has given us a thoughtful, deeply researched, and engaging book that will appeal to both scholarly and nonscholarly audiences. He provides considerable historical context that enriches our understanding of Gandhi as a figure on the world stage.

Most of all, he limns Gandhi as a spiritual seeker, underscoring his inner life as the key to his exceptional success as a leader.

Roberts directs the journalism program at the University at Albany and is the author of “Dorothy Day and the Catholic Worker.”

PREVIOUS: Despite shortcomings, film treatment of ‘Son of God’ is solid