Despite shortcomings, film treatment of ‘Son of God’ is solid 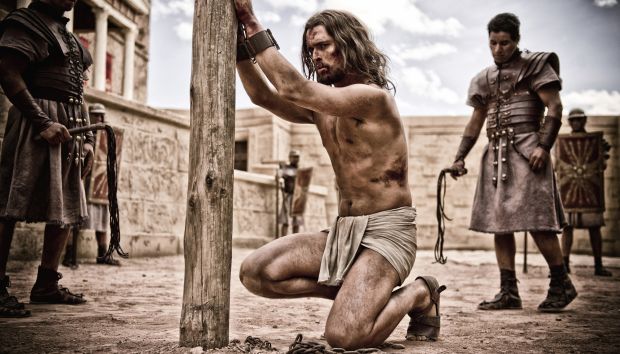 Diogo Morgado stars in a scene from the movie "Son of God." (CNS photo/Fox

NEW YORK (CNS) — As the first wide-release film in nearly 50 years to focus on the life of Jesus as a whole, “Son of God” (Fox) represents an epochal event for believing moviegoers.

Though not the most powerful mass media treatment of its subject — that accolade continues to belong to Franco Zeffirelli’s 1977 television miniseries “Jesus of Nazareth” — director Christopher Spencer’s reverent but uneven screen version of the Gospel story ranks as a worthy revival of the Hollywood biblical epic.

(Watch the trailer below.)

The screenwriters, led by Nic Young, find an efficient entree into their narrative by entrusting it to an aged St. John the Evangelist (Sebastian Knapp) during his exile on the island of Patmos. This is theologically helpful because the opening lines of the Beloved Disciple’s Gospel, as recited here, describe the Incarnation, a mystery without which all that follows could easily be misconstrued.

Early scenes leading up to and including the Nativity will remind at least some viewers that “Son of God” is an outgrowth of last year’s highly successful miniseries on the History cable channel series, “The Bible.” The new footage that follows is at its best in its portrayal of the events that culminated in the crucifixion of Jesus (Diogo Morgado).

Catholic viewers will also appreciate the unqualified acknowledgement of St. Peter (Darwin Shaw) as the leader of the Apostles as well as scenes highlighting Mary’s (Roma Downey) closeness to her son. And, though the portrayal of the Last Supper seems somewhat noncommittal as to the meaning of the Eucharist, a rough-and-ready celebration of the sacrament is shown to be the chosen moment for the Lord’s first post-Resurrection appearance to the Twelve.

As for the ministry and preaching that precede the Passion — during which Jesus draws the disapproving attention of Simon the Pharisee (Paul Marc Davis) — there are moments that range from the moving to the awkward.

Morgado brings the requisite gravity to bear in announcing that the passage from the Prophet Isaiah he has just read aloud in Nazareth’s synagogue has now been fulfilled. But the story of Lazarus’ death and revivification is truncated — and drained of much of its impact — by the absence of any hint of Jesus’ previous friendship with him and with his mourning sisters.

Despite such shortcomings, as produced by Downey, Mark Burnett and Richard Bedser, Spencer’s picture offers some solid catechesis and an easy introduction to the Lord’s earthly biography. That’s all the more valuable given the erosion in religious literacy our society has experienced since the appearance of “Son of God’s” most recent — yet far distant — predecessor, George Stevens’ 1965 Gospel drama “The Greatest Story Ever Told.”

In that context, and despite its unflinching treatment of the Redeemer’s sufferings, “Son of God” is probably acceptable for older teens.

The film contains strong gory violence. The Catholic News Service classification is A-III — adults. The Motion Picture Association of America rating is PG-13 — parents strongly cautioned. Some material may be inappropriate for children under 13.

PREVIOUS: With latest merger news, how big is too big?