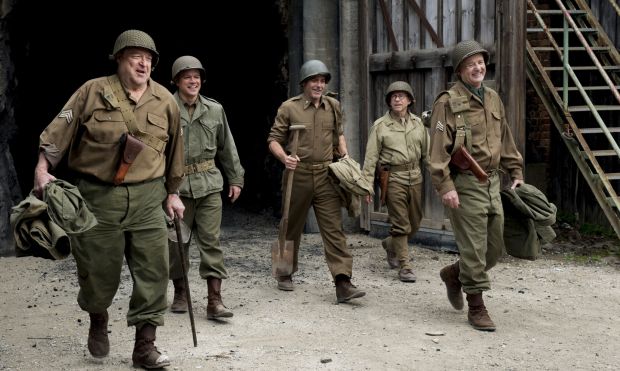 NEW YORK (CNS) — Western civilization owes an incalculable debt to the real-life figures behind the fact-based World War II drama “The Monuments Men” (Columbia). Yet, despite honorable intentions and a cast of heavy hitters, this cinematic salute to their memory falls well short of the monumental.

The film’s title comes from the nickname of the Army’s Monuments, Fine Arts, and Archives program. Formed in 1943, this collection of art historians and similar experts was charged with — among other tasks — tracing and rescuing the vast store of cultural treasures purloined by the Nazis during their more than four-year-long occupation of most of Europe.

The sleuthing required to achieve this goal was recounted in Robert M. Edsel’s eponymous 2009 book, written with Bret Witter and subtitled “Allied Heroes, Nazi Thieves and the Greatest Treasure Hunt in History.” In bringing Edsel’s narrative to the screen, George Clooney takes on multiple roles: co-writer (with Grant Heslov), director and star.

In that last capacity, he plays affable Harvard professor Frank Stokes. After convincing President Roosevelt of the need for a unit along the lines of the Monuments Men, World War I veteran Stokes re-enters the service and sets out to assemble his team.

As these over-the-hill soldiers adjust to life in uniform, and to the perils of the Western Front, their attention focuses on Paris museum curator Claire Simone (Cate Blanchett), who witnessed the Teutonic looting firsthand.

James is dispatched to the City of Light to quiz Claire, who has been imprisoned as a collaborator (earlier scenes have vindicated her innocence for the audience). But he finds Claire uncooperative, based on her conviction that the American forces will simply seize the recovered works for themselves and ship them stateside.

The script’s comic byplay is amusing enough. Richard and another of the group’s number, mousey, bespectacled Preston Savitz (Bob Balaban), tease each other relentlessly. And scenes of basic training find Walter walking casually across an obstacle course, blithely unaware that the shots being fired over the heads of the prone soldiers around him are not blanks.

Yet a firm foundation is never laid for the picture’s more solemn moments, most of which concern the band’s shared fraternal spirit and pride in its mission. These are too casually flagged by way of dialogue, so that the underlying sentiments register as prefabricated.

Besides the story’s primary message about the enduring value of art in all its forms, the background of Nazi persecution implicitly drives home the importance of treating all human beings with equal dignity. And a potentially adulterous encounter that comes too late in the action to be described without a spoiler ends in a way viewers of conscience will welcome.

With wartime bloodletting kept to a minimum and vulgar language probably far less in evidence than it was among the ranks in reality, only a surprising number of violations of the Lord’s name pose any serious obstacle to recommendation for a wider audience. With its positive themes in mind, accordingly, at least some parents may consider “The Monuments Men” acceptable for mature teens.

The film contains some combat violence with brief gore, about a half-dozen uses of profanity and a few crude and crass terms. The Catholic News Service classification is A-III — adults. The Motion Picture Association of America rating is PG-13 — parents strongly cautioned. Some material may be inappropriate for children under 13.

PREVIOUS: Much more than pie-making going on in ‘Labor Day’

NEXT: Historian looks back at 20th-century war between Catholicism, modernity