‘Pompeii’ is a 3-D disaster movie engulfing a soap opera 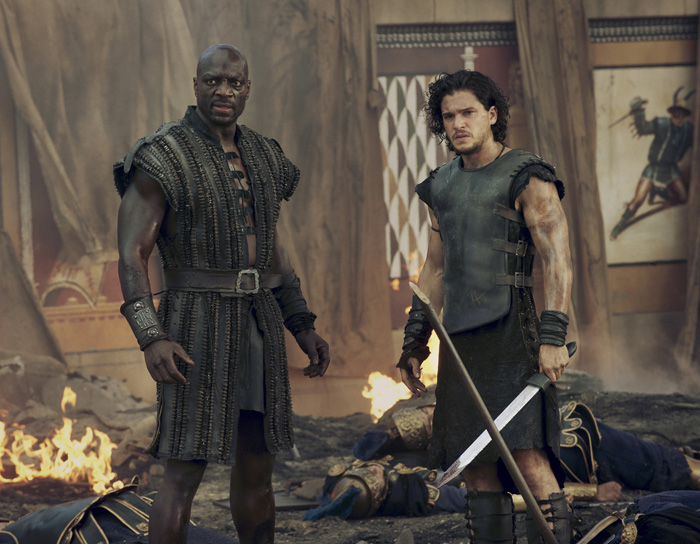 Adewele Akinnouye-Agbaje and Kit Harington star in a scene from the movie "Pompeii." The Catholic News Service classification is A-III -- adults. The Motion Picture Association of America rating is PG-13 -- parents strongly cautioned. Some material may be inappropriate for children under 13. (CNS/Sony)

NEW YORK (CNS) — “Still more imagined there were no gods left, and that the universe was plunged into eternal darkness for evermore,” wrote the Roman author Pliny the Younger on the day after the cataclysmic eruption of Mount Vesuvius in 79 A.D.

The events to which Pliny was an eyewitness are recreated in eye-popping 3-D in “Pompeii” (TriStar), an old-fashioned disaster movie chronicling the last days of the doomed Italian town on the Bay of Naples.

Paul W.S. Anderson (“Resident Evil”) directs a mash-up of “Gladiator,” “Titanic” and even “The Towering Inferno” in this imperial soap opera, a swords-and-sandals tale of forbidden love, revenge and a whole lotta lava. It’s a cheesy, blood-soaked effort, redeemed only by some spectacular special effects once the volcano decides to blow its top.

Milo (Kit Harington), a slave-turned-gladiator, is brought to Pompeii to star in the arena. He harbors a deep hatred for the Roman Empire and its wicked rulers. That’s because one such leader, a senator named Corvus (Kiefer Sutherland), led a campaign of genocide which killed Milo’s parents when he was a boy and cast him into slavery.

Milo forges an alliance with veteran fighter and resident sage Atticus (Adewale Akinnuoye-Agbaje). Together they hatch a plan to obtain their freedom.

In the meantime, the volcano next door is rumbling, shaking the ground and rattling nerves.

“Is this normal?” Milo asks.

“It is the mountain. It reminds us that it is there,” says Atticus.

The earth really moves when Milo meets the comely Cassia (Emily Browning), privileged daughter of a wealthy merchant (Jared Harris). Cassia dislikes the Roman elite, too, especially Corvus, who arrives in Pompeii and claims her for his bride.

Apart from being handy with a sword, Milo is also a horse whisperer. No sooner does he calm Cassia’s beloved white steed then the two of them cast discretion to the wind and gallop off into the countryside.

Not so fast, as Milo’s still a slave and expected to fight. Corvus targets his rival for Cassia’s affections for death. The climactic swordfight is interrupted when Vesuvius roars to life and all heck breaks loose.

It’s every Pompeian, free or not, for himself as fire and ash rain down on the town, a tsumani is spawned, and Milo makes a desperate dash to rescue Cassia.

The film contains much gory violence and a few brief sexual images. The Catholic News Service classification is A-III — adults. The Motion Picture Association of America rating is PG-13 — parents strongly cautioned. Some material may be inappropriate for children under 13.

PREVIOUS: Saints for saints to be: 3 books help those striving for holiness

NEXT: With latest merger news, how big is too big?