It’s a working vacation for priests in cruise ship ministry 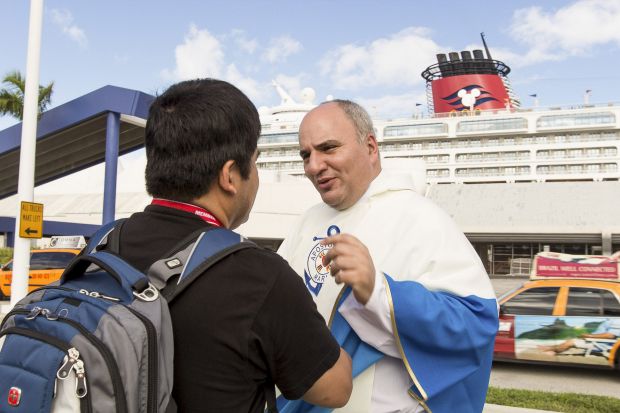 Father Roberto Cid, director of the Stella Maris center at the Port of Miami, chats with a crew member from a Disney ship. (CNS photo/Tom Tracy)

WASHINGTON (CNS) — Priests traveling on cruise ships are not just there for the wind and the waves. Although they may indeed be enjoying the same amenities as other passengers, they are working.

“This is real ministry. It’s not necessarily heavy-lifting ministry, but it is ministry,” says Father Sinclair Oubre, who until early 2013 was president of the Apostleship of the Sea-USA, which oversees, among other things, cruise ship ministry. Father Oubre has done a couple of chaplaincies aboard cruise ships himself and has also worked below-board as a seafarer.

The Apostleship of the Sea-USA even has a manual for priests to follow when serving in this specialized ministry.

No priest is ever assigned full time to luxury liners. Many clergy manage to squeeze in a cruise during their regular vacations. Some retired priests have the time to go on extended trips though.

“We get calls from guys who want a free cruise. And we tell them, if you want to cruise, buy a ticket,” Father Oubre says. “But if you do this job correctly, it’s four hours of work a day or more.”

Father Charles Sabella of the Diocese of Metuchen, N.J., recalled one cruise where he was on deck listening to someone’s confession. Before he knew it, there was a line; he heard passengers’ confessions for five hours straight.

On the same cruise, a young woman hired to be part of the orchestra was told she was being fired and would be sent home once they reached the next port. “That was three days away,” Father Sabella recalls. “She didn’t have a lot of faith or anything, but she needed somebody, so for three days straight, a couple of hours each day, I spent talking with her.”

Doreen Badeaux, secretary general for the Apostleship of the Sea-USA, said that in the early 2000s it was a much different scene aboard ships.

“The U.S. bishops were getting a lot of ‘nastygrams’ from passengers aboard cruise ships who thought they were Catholic priests but they were not Catholic priests, (and) doing all sorts of things on board the ships that they should not have been doing.”

Some passing themselves off as legitimate Catholic clergy were married men; Father Oubre said some would wait until the fifth day of a cruise to introduce their wives. “All the celibate priests were busy,” was a typical excuse Badeaux said they would give. Others, she added, were “schismatics.” Still others had been accused of sexual misconduct and were pretending to be “on sabbatical.”

This led to getting the cruise-ship chaplaincy shipshape. Currently there are 550 priests involved in the program. Some priests go occasionally, others frequently.

Father Sabella said his 9 a.m. Mass aboard ship draws 20-80 passengers. Sunday Mass, even on a cruise ship holding a relatively small number such as 1,200-1,500 passengers, will draw 500 worshipers, he added. One big point, especially on long east-west cruises, is changing your clock every day so that Mass starts on time.

Father Oubre notes that on his cruise assignments “there was an ecumenical service on most of those days also.” Afterward, he recalls, “I would go and sit in the common area in case anyone wanted to come and talk with me. I would also go to the infirmary to check in to see if there were any folks who were sick and needed to be anointed.”

Because the passenger demographic skews older than the U.S. average, there is ministry to the sick and even to the dying.

On a cruise from Puerto Rico to Spain, Father Sabella anointed a woman several hours before she died and tried to provide comfort to the family members.

Father William Reynolds, a priest of the Diocese of Davenport, Iowa, and a canon lawyer who goes on at least one cruise a year, said he thinks passengers like the anonymity of talking to priests they really don’t know.

“It’s an opportunity for me as a canonist to talk marriage issues with people, to meet with people who need to be seeking an annulment, so I help in that venue,” he added.

If a cruise has a priest on board, he’ll likely be in his clerical clothing when he’s on duty. Still, don’t look for any on-board weddings, although a private anniversary blessing may be in order. But even if a priest is in civilian clothing, he won’t be on a barstool or in the ship’s casino. Those places are strictly off-limits.

Since the Apostleship of the Sea’s cruise ship priest program started, there have been only six instances of cruise lines lodging complaints about priests and, after investigation, not one priest has ever been dismissed from the program.

Another aspect of cruise ship ministry that passengers rarely see is pastoral care of the crew. Most crew members hail from heavily Catholic Latin America, the Caribbean or the Philippines, and work nine or 10 months without a day off.

“They’re on the move constantly,” Father Reynolds says, “and they can’t go to a church, so the church comes to them.”